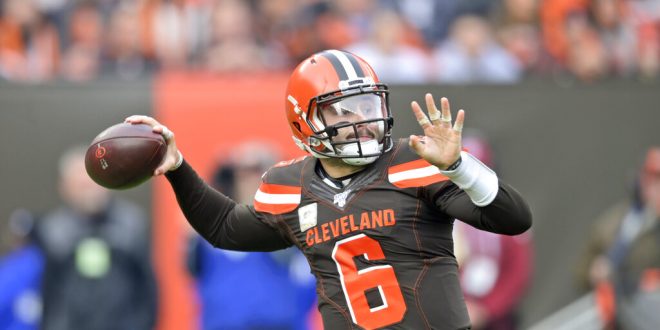 The Week 11 edition of Thursday Night Football includes the Pittsburgh Steelers (5-4) traveling to the dog pound to face the Cleveland Browns (3-6). The Steelers are looking to hold on to their wildcard spot as they are the current 6th seed in the AFC. Cleveland is in the midst of a very disappointing season after being highly touted in the offseason. The Browns have no wiggle room the rest of the way if they want to stay in the hunt.

The 2019 version of Steelers-Browns feels much different than those of the past.

Instead of Ben Roethlisberger playing one of Cleveland’s revolving door of quarterbacks, it’s Cleveland who has the advantage at QB when it comes to experience. Baker Mayfield will try to turn things around as his sophomore campaign has not gone as planned. Mayfield is 2nd in the league in interceptions with 12. Things are not all doom and gloom for the Heisman Trophy winner as he has shown some improvement since Cleveland’s bye week.

#Browns Baker Mayfield since the bye:

Mason Rudolph has done relatively well in his time taking over for Big Ben. The Oklahoma State product has thrown for 11 touchdowns while only throwing four interceptions.

How the Browns Win

If Cleveland is to win and keep their postseason hopes alive, it will need to do what they do best– run the football.

The Browns rank 2nd in the NFL in yards per carry with 5.2. Running back Nick Chubb has done a solid job in his second season as he has rushed for 919 yards and six touchdowns. The former Georgia Bulldog is averaging 5.3 yards per carry. If the Browns can get the ground game working and alleviate some of the pressure off Mayfield’s shoulders, that will open up their offense.

How the Steelers Win

The main reason why Pittsburgh was able to overcome their tough start to the season was because of their defense.

The steel curtain is back in a big way this season as the black and yellow have been causing havoc all season long. The Steelers are 10th in the NFL in points per game allowed with 20.1. They have shown all season long that they have been able to stop the run, and that spells bad news for the Browns. Pittsburgh is 7th in the league rush defense with 3.9 yards per carry allowed. In fact, they have yet to allow a 100-yard rusher all season long.

If the Steelers run defense comes to play, it turns into open season for their defensive playmakers. T.J. Watt has been giving opponent offensive lines headaches this year with his 9.5 sacks and four forced fumbles. Don’t be surprised if you see Minkah Fitzpatrick make a play with Mayfield’s interception problem. The former Miami Dolphin has five interceptions, one fumble recovery and one forced fumble since joining the Steelers.

The plan for Pittsburgh is to win the game on defense so Rudolph doesn’t have to do too much.

The primetime matchup between the Steelers and Browns will kick off at 8:20 p.m. The game can be seen on both the NFL Network and FOX.