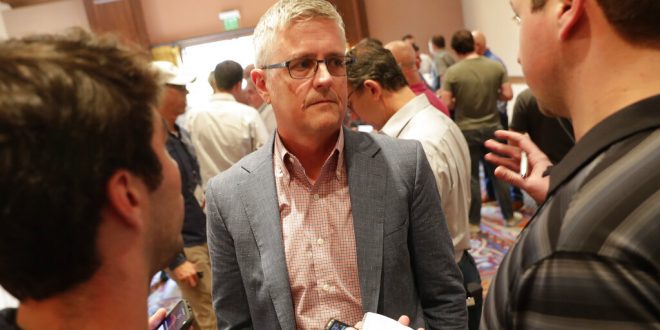 Trouble is brewing in Texas for a former championship-winning team.

Less than three weeks ago, the Houston Astros suffered a heart-wrenching loss in the World Series to the Washington Nationals. The thrilling, seven-game finale to the postseason marked the Nationals’ first World Series crown in team history. In turn, the Astros were denied their second World Series win in three years.

Now, the MLB and other ball clubs are questioning the integrity of their historic 2017 World Series title.

Veteran right-hander Mike Fiers, who pitched for the Astros from 2015-2017 before he was non-tendered, became a whistleblower this week when he sat down with The Athletic to discuss the matter.

In a somewhat shocking interview, Fiers told the publication that the Astros used a center-field camera to relay a video feed into a monitor in the dugout. Then, hitters and coaches would use the feed to decipher opposing teams’ signs.

“It’s ruining jobs for younger guys,” said Fiers. “The guys who know are more prepared. But most people don’t. That’s why I told my team. We had a lot of young guys with Detroit trying to make a name and establish themselves. I wanted to help them out and say, ‘Hey, this stuff really does go on. Just be prepared.'”

Fiers’ comments have now prompted the Astros to conduct an internal investigation as MLB continues to monitor the situation.

ICYMI – This is the infamous garbage can banging noise from a Blue Jays and Astros game back in 2017. It's very clear if you listen with headphones, too. pic.twitter.com/FLevUbzKnj

In actuality, baseball coaches at plenty levels encourage sign stealing. Knowing an opposing team’s signs can be well worth the risk for most managers or coaches on any given day.

However, using any sort of electronics — let alone cameras — to steal signs represents a violation of MLB’s rules against technology.

In the wake of Fiers’ interview and the corresponding allegations, the Astros issued a statement on Tuesday.

“Regarding the story posted by The Athletic earlier today, the Houston Astros organization has begun an investigation in cooperation with Major League Baseball,” it said. “It would not be appropriate to comment further on this matter at this time.”

Additionally, there are some other very notable figures around MLB that might’ve been involved with the Astros’ sign-stealing operation.

Current Red Sox manager Alex Cora was the bench coach for the Astros in 2017 and allegedly played a key role in stealing signs. Newly appointed manager of the New York Mets, Carlos Beltrán, played the final season of his career in 2017 with the Astros. Many believe that Beltrán was also instrumental for the Astros in the matter.

This isn’t the first time that the Astros have been suspected of stealing signs. Rather, MLB has investigated the Astros for similar allegations on various occasions in recent years.

First, the Oakland A’s claimed the Astros were stealing signs back in 2018. Then, stadium security removed an Astros’ employee on two separate occasions for pointing a phone towards the team’s dugout. These incidents came against the Boston Red Sox and Cleveland Indians. Lastly, as recently as after Game 1 of this year’s ALCS, the New York Yankees claimed the Astros were using whistles and bats to tip their pitches.

MLB found no malpractice in any of these cases.

The difference between Fiers’ comments and past investigations is the blatant usage of cameras that may appear evident in the former.

With MLB idly analyzing the current situation, many are wondering if baseball’s long-standing issues with sign-stealing will ever fully be resolved. As technological advancements continue to increase, the lines will only get blurrier for MLB in the future.