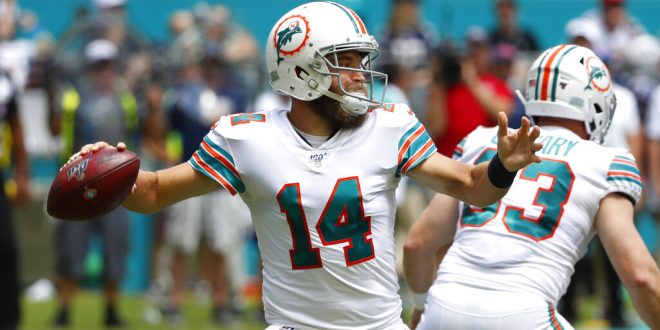 The Dolphins are on a two-game win streak and currently sit at 2-7. Buffalo currently sits at second in the division at 6-3.

The narrative around the Miami Dolphins has changed in the last two weeks. After losing their first seven games, many considered the possibility that Miami might not win a game this season.

According to Miami starting quarterback Ryan Fitzpatrick, the feeling in the locker room has changed.

In the last two weeks, the Dolphins averaged 272 yards of offense and 17.5 first downs. Against the Jets on Nov. 3, Ryan Fitzpatrick threw for three touchdowns, showing there’s still magic in that beard.

Buffalo head coach Sean McDermott gave the Dolphins credit when he addressed the media on Nov. 13

So far this season, the Bills are allowing 188.7 yards passing per game. Ryan Fitzpatrick’s connection to DeVante Parker, or lack thereof, could be one of the deciding factors on Sunday.

Being a division rival, there is a sense of familiarity between the two teams. According to Fitzpatrick, familiarity does not play a huge role in this matchup.

For Buffalo, the team continues to gain confidence. According to Bills quarterback Josh Allen, it’s his responsibility to make this team better.

Additionally, Allen says he’s working on his ball security. The Bills quarterback has seven interceptions and four fumbles so far this season. Not turning the ball over is a pivotal part of a team’s success, and teams that land on the plus side of turnovers tend to win.

Miami has caused 7 turnovers this season and sits at -12 in turnover differential. If the Dolphins are able to stay on the plus side, they could be in a position to win their third straight.

Steven Walker is a beat writer for ESPN Gainesville and is currently studying Journalism & Sports Media at the University of Florida.
@swalker_7
Previous National and American League award winners
Next NFL Comes Down Hard on Myles Garrett for Last Night’s Late-Game Fiasco