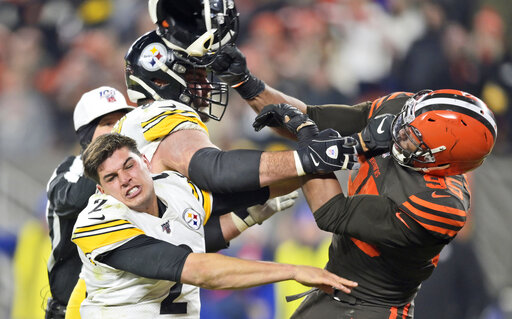 Steelers Quarterback Mason Rudolph threw for 221 yards, one touchdown and four interceptions last night. That wasn’t the end of Rudolph’s rough night though, as he was struck in the head with his own helmet when tensions ran high.

Myles Garrett has already been fined twice this season, but what took place last night was the straw that broke the camels back.

There were 8 seconds left in the game after Rudolph had thrown four interceptions. It was the last drive of the game, and defensive end Myles Garrett got to Rudolph after he released the ball. The play had stopped, but Garrett didn’t.

Garrett dragged Rudolph to the ground, but Rudolph tried to take Garrett’s helmet off. This prompted Garrett to take Rudolph’s helmet off. What ensued was described by Browns QB Baker Mayfield after the game as “inexcusable.”

Garrett was rushed by Steelers players, and in the chaos, swung Rudolph’s own helmet at him, connecting with his head.

The punishment was swift, as the NFL came down hard on Garrett today. Garrett has been suspended indefinitely without pay. He will no doubt miss the playoffs if the Browns are able to make it that far. The suspension could also leak over into next season, but the jury is still out on that.

Garrett was apologetic after his actions, stating that he made a “terrible mistake.”

Myles Garrett will look to make things right in the coming weeks and months, as this incident has put a glaring blemish on his record.

Garrett has been fined over $50,000 for separate events this season. Earlier this season, Garrett punched Titans’ tight end Delanie Walker, and delivered two late hits on Jets’ QB Trevor Siemian. The second hit to Siemian proved costly as it ended his season with an ankle injury.

Garrett is no stranger to fines, but this suspension is uncharted territory.

Garrett was not the only player punished for what occurred last night. Steelers center Maurkice Pouncey also got into the scuffle, kicking and punching Garrett while he was on the ground. He will be suspended for three games. Browns defensive tackle Larry Ogunjobi has been suspended a game for pushing Rudolph to the ground after Garrett’s actions.

The dust has not completely settled yet. Both teams have been fined $250,000 for their involvement, and in Garrett’s case especially, there may be more to come. Garrett is appealing his current suspension, but given how seriously the NFL takes these cases, it may be unlikely he will get it shortened.

Garrett’s fate is up to the NFL Commissioner’s Office, and if history is any indication, they will not be kind to him.

What’s Next for These Teams?

The Steelers will move on and play the Bengals on November 24, as it does not appear that Mason Rudolph will be suspended for his part in the brawl last night.

The Steelers are looking to move past the events of last night’s game and keep pushing for a playoff spot.

The Browns, on the other hand, will move forward indefinitely without Myles Garrett and have some time to recoup before they play the Dolphins on November 24.

They will try to put this situation in their review mirror as they are also fighting for a playoff spot.

My name is Caleb Mikita, and I am a telecommunications major at the University of Florida from St. Pete, FL. I am a fan of all things sports, but my main passion is baseball. My long term goal is to become a sports analyst or writer for MLB Network.
@@caleb_mikita8
Previous Miami Faces Off Against Division Rival Buffalo in Search of Third Straight Win
Next Foles Returns in AFC South Battle