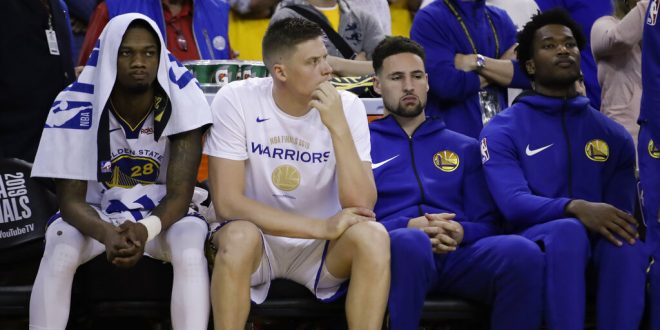 Golden State Warriors' Alfonzo McKinnie, from left, sits on the bench with Jonas Jerebko, Klay Thompson and Damian Jones during the second half of Game 3 of basketball's NBA Finals against the Toronto Raptors in Oakland, Calif., Wednesday, June 5, 2019. (AP Photo/Ben Margot)

After Five Straight Finals, Warriors Destined for the Lottery

It doesn’t take long to fall from the elite status in the NBA.

After four consecutive finals appearances, the Miami Heat went 37-45 and missed the playoffs. The Cavaliers experienced the same thing last season, going 19-65 after also making four finals appearances. The Golden State Warriors are experiencing something similar as they are struggling in the early stages of the season.

After years of dominating the league, the league is returning the favor.

The Warriors sport the league’s worst record at 3-13. A mixture of a generational talent leaving and injuries have the Warriors in a tough spot. Kevin Durant is now residing in Brooklyn while Steph Curry and Klay Thompson heal from their respective injuries. The Warriors signed D’Angelo Russell in the offseason but even he has struggled to stay healthy. After averaging 24.3 points and 6.7 assists in ten games, Russell suffered a right thumb sprain that will force him to miss two weeks. Draymond Green is also proving to be less effective without the likes of Curry and Thompson. Green has struggled to shoot efficiently when he is on the court.

Wednesday night hit a new low for the Dubs. The Dallas Mavericks had their way with Golden State. The Mavs beat the Warriors by 43 points and they didn’t even break a sweat. Luka Doncic recorded a triple-double in only 25 minutes. Doncic had more points, rebounds, and assists than the entire Warriors team in the 1st quarter.

"Flush it down the toilet, literally you move on. You don't take anything from a game like this."

– Steve Kerr after the Warriors' 48-point loss last night to the Mavs pic.twitter.com/h1hASrgeAE

It’s time to look towards the bigger picture for Golden State. After making it to late June the past five seasons, it may not be the worst-case scenario for the Warriors to miss the playoffs. If the rest of the season plays out like their first 16 games, Golden State will be destined for the lottery.

For Warriors fans, it might be time to start looking at some 2020 mock drafts.

Previous Colts Head to Houston to Take On the Texans
Next Raptors Snap the Magic’s Win Streak; Vucevic and Gordon Hobbled