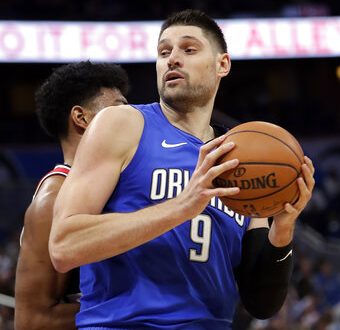 Orlando Magic's Nikola Vucevic (9) makes a move to the basket against Washington Wizards' Rui Hachimura, left, during the second half of an NBA basketball game, Sunday, Nov. 17, 2019, in Orlando, Fla. (AP Photo/John Raoux)

The week of Nov. 13- Nov. 20 treated the Orlando Magic rather kindly.

Three consecutive wins against Philadelphia, San Antonio and Washington during that period meant Orlando arrived at Scotiabank Arena in Toronto on Wednesday night with momentum. Following a 3-7 start to the season, Steve Clifford’s team needed to string together a fine stretch of games.

Queue the defending NBA champions on their home court. Guard Fred VanVleet led the Raptors with 24 points and seven assists. Pascal Siakam added 18 points and 11 rebounds as the Raptors cruised to a 113-97 victory.

However, losses via injury to both center Nikola Vucevic and forward Aaron Gordon could be of higher importance to Clifford than the game’s final score. Both players exited Wednesday’s game in the second quarter with right ankle injuries.

Vucevic entered the contest as the Eastern Conference’s reigning Player of the Week (21.7 points, 14 rebounds, 4 assists during that span).

Raptors coach Nick Nurse heaped praise for Vucevic prior to the game.

Thus far, no NBA team has earned a victory on Canadian soil this season.

The Raptors improved to 6-0 at home after Wednesday night’s game. Three other teams have yet to lose at home (Miami, Boston and Philadelphia). Meanwhile, Orlando is yet to win a game on the road (0-5). Only the Oklahoma City Thunder have a worse road record (0-6).

The Magic evidently struggled to score with the losses of their two best offensive players. The score was knotted up at 32 following one quarter, but Toronto outscored Orlando by 10 in the second. Gordon and Vucevic’s absence signaled a large increase in shot attempts for guards Evan Fournier, Markelle Fultz and forward Jonathan Isaac. All three players finished with their highest number of respective shot attempts for the season.

While Fournier collected 21 points and Isaac added 16 to go along with 13 rebounds, the Magic combined to shoot 38.5 percent from the field on Wednesday. Isaac had also missed Orlando’s two previous games with an ankle injury.

Gordon briefly spoke about his injury after the loss.

“It was basically a full jump,” Vucevic said. “I came down and landed on the back of someone’s leg and rolled over. That’s why I knew it was hurt a little bit more because I had jumped all the way up.”

Toronto will travel to Atlanta to face the Hawks on Saturday. Currently, the reigning champions sit in fourth place of the Eastern Conference. Orlando continues their road trip in Indiana on Saturday as well.

Nurse said there’s no return date for guard Kyle Lowry yet, but forward Serge Ibaka could recover from a right-ankle injury in time for Saturday’s game.

Then there are Orlando’s fresh injury concerns.

After being helped to the locker room, X-rays on Vucevic’s ankle came back negative. However, he was unable to put weight on his right leg and is scheduled for an MRI Thursday.

Clifford spoke explained the negative impact Vucevic’s impending absence will have on his team moving forward.

“When you lose your best player, it’s hard to say you have more than enough,” Clifford said. “You get up in the morning, you say ‘Who do we have,’ and then you figure out the best way to have a good day with that group,” he said. “That’s all you can do in this league.”