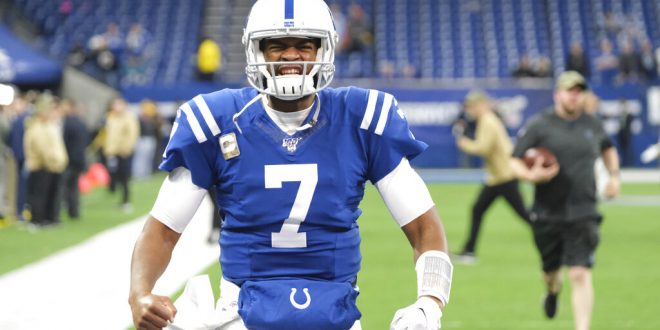 Colts Head to Houston to Take On the Texans

This week, Thursday Night Football features the Indianapolis Colts and the Houston Texans. Both teams are 6-4 this season.

Jacoby Brissett has stepped up to the plate for Indianapolis this season. He has thrown for 1,797 yards and only four interceptions so far this season. With 15 touchdowns thus far, he already surpassed the 13 touchdowns he threw during 16 games for the Colts in 2017. Brissett is flexible and can be dangerous with the ball because his offensive line gives him time. He is skilled enough to run the ball if needed. Houston’s defense needs to get past Indianapolis’ blockers quickly to prevent Brissett from being able to move the ball.

Deshaun Watson is ranked 12th in the NFL for passing yards (2,601) and eighth for passing touchdowns (18) this year. He does, however, have six interceptions and four fumbles. He has been sacked 31 times this season. The Colts will have a field day with sacks if his offensive line does not protect him or if he takes his time with the ball. 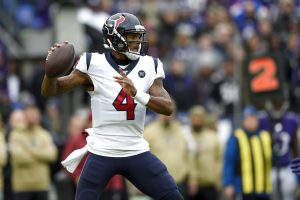 Both teams have running games that are reliable and efficient. They’re the fourth and fifth ranking teams for average rushing yards per game, and the defense’s ability to stop these yards will be a make or break variable in this game.

The Colts are fourth in the NFL in rushing yards per game, with an average of 141.1 this season. Marlon Mack is fifth in the league for total rushing yards and he has been leading his team in rushing yards and rushing touchdowns this season. However, he is unable to play after suffering a hand injury last week against the Jaguars. This means Jordan Wilkins will need to step up his game and fill Mack’s shoes so the Colts can still dominate the ground game.

With such a solid offensive line, the Colts can create space for running backs to gain yards, move the chains and keep the clock running.

However, the Texans have an equally reliable ground game. They are ranked fifth in the league and average 140.7 yards per game, led by running back Carlos Hyde. He ranks 11th in rushing yards in the league and has scored four touchdowns so far this season. He can be a secret weapon for the Texans if they can’t get the ball to wide receiver DeAndre Hopkins.

Hopkins is 15th in the NFL in receiving yards and has four touchdowns under his belt this season. He will be going up against a Colts defense that has 25 sacks this season. Watson needs to think quick but still hit his targets perfectly, because the Colts also have seven interceptions on the year.

Linebacker Darius Leonard leads the Colts with 65 tackles in the seven games he’s played for Indianapolis this season. He is coming in hot after last week’s win against the Jaguars, where he had five total tackles. Another Colt to beware of is defensive end Justin Houston, who is 11th in the NFL in sacks (8) this season. Head coach Frank Reich says Houston is becoming more of a leader, which means he will be a force to be reckoned with on that Colts defense.

Overall, both teams have similar stats and skillsets. This will be a close game and could turn into a battle of the defenses, depending on the performance of blockers on each team’s offensive line. If the Colts can keep their composure and play both the rush and pass game cleanly, they can extend their win streak, sweep the Texans this season and jump on the first place spot in the AFC South.