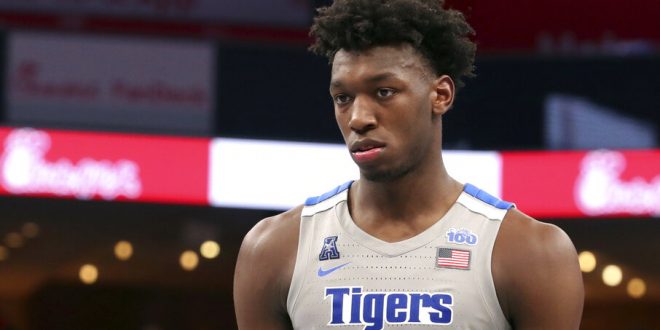 Memphis James Wiseman (32) take his position on the floor between plays iduring the second half of an NCAA college basketball game against Illinois-Central Friday, Nov. 8, 2019, in Memphis, Tenn. (AP Photo/Karen Pulfer Focht)

James Wiseman, one of the best players in college basketball, and the projected No. 1 pick in the 2020 NBA Draft is officially out. And it’s over something that he allegedly didn’t even know happened.

The freshman star out of Memphis was handed a 12-game suspension by the NCAA. He was previously ruled ineligible prior to a game against the University of Illinois at Chicago almost two weeks ago. However, he obtained a temporary restraining order, allowing him to play in that game. Wiseman has already sat out two games, so he has 10 more. He won’t be eligible until Memphis plays South Florida on Jan. 12. He posted this on Twitter after the NCAA made their ruling.

The punishment from the NCAA comes from a couple of violations. The initial violation was that Wiseman’s mother accepted $11,500 from now-Memphis head coach Penny Hardaway. The second comes from what happened this season. Wiseman played in three games this season while ineligible.

The situation that prompted an investigation and now suspension is interesting to say the least. Wiseman was a heavily recruited player in high school. He was the No. 1 prospect in the 2019 class. Memphis head coach, Penny Hardaway, was a high school coach at the time. He coached at East High School in Tennessee.

In the summer of 2017, Wiseman’s family was moving from Nashville to Memphis. Hardaway gave Wiseman’s mother the money, which she used to cover moving expenses. This all, according to the University of Memphis, happened without Wiseman knowing a thing.

Now, Hardaway wasn’t hired as the head basketball coach for Memphis until 2018. But, he is a Memphis alum. Hardaway is considered a booster by the NCAA. This is because of a $1 million donation he made in 2008 to build a sports hall of fame. That is where the violation lies. Because Hardaway is considered a booster, it means that Wiseman accepted money from a booster, which could have impacted his recruitment.

This all led to the suspension. In addition to the suspension, Wiseman is being told by the NCAA that he must pay back the $11,500 to a charity of his choice. This punishment that has received a lot of backlash from fans and sports personalities.

What a minute, so James Wiseman is suspended 11 more games, and he or family must pay $11,500 to a charity of their choice? Or Memphis will pay the money? How is the family going to pay this when they had problems moving in the first place?? Asking for a friend…

While many see the punishments as unfair, it is what the NCAA has decided. And one thing is certain, Wiseman will be back.

And when he is, every team in the country better watch out for Memphis.

Previous Raptors Snap the Magic’s Win Streak; Vucevic and Gordon Hobbled
Next Garrett incident still on the minds of the Steelers and Browns