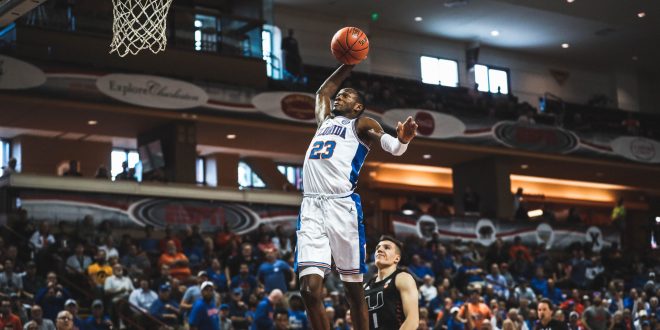 The Florida Gators men’s basketball team defeated the Miami Hurricanes 78-58 in the semi-final round of the Charleston Classic.

Next, the Gators advance to the championship round. Florida plays the winner of No. 18 Xavier versus Connecticut at 9:30 p.m. on Friday.

Florida had four players score double-digit points against the Hurricanes.

Kerry Blackshear Jr. led all scorers with 20 points and 11 rebounds, which was his fourth double-double of the season.

Scottie Lewis scored 13 points and grabbed 8 rebounds, including a collection of monster dunks to get the Gators going offensively.

Lastly, Ques Glover scored 11 points playing in place of Tre Mann, who suffered a concussion against UConn on Nov. 17.

One of the main reasons Florida won by so many points was due to their effort on the defensive end. The Gators held Miami to zero points in a 10-minute span in the second half, which led to them outscoring the ‘Canes 40-25 in the second period.

Leading the defensive charge was Andrew Nembhard. The sophomore guard had 4 steals, all of which led to fastbreak opportunities that turned into points. The Gators scored 21 points off of turnovers they created.

Earlier in the week, White mentioned that a point of emphasis leading into the game was to gain confidence in shooting the ball. Against Miami, Florida shot 53% from the floor, and 54% from three-point range, a large improvement on their percentages this season.

Defense was important, but the real spark for the Gators was the play of Kerry Blackshear Jr. The Gators were a completely different team when he was on the floor. Blackshear Jr shot 50% from the field and hit 3 three-point shots in his return to the court after being ejected against St. Joseph’s for a flagrant 2 foul.

Blackshear’s presence was felt on the floor at all times. When he was in the game, the Miami defense had to respect his versatility, which opened up passing lanes for other people. When he briefly exited in the first half, the team immediately committed a turnover and almost looked lost on the court.

Scottie Lewis continued to show Gator fans why he is one of the most electrifying freshmen on Florida’s roster. Lewis had rim-shattering dunks in transition, often off of great defensive plays from himself or teammates.

Now THERE is the Scottie Lewis I’ve been waiting to see. pic.twitter.com/tuHEhHZT1S

Additionally, his athleticism jumps off the screen. Lewis’ defensive aggression and speed allowed him to recover if he overcommitted or missed. His play against Miami in creating turnovers was one of the focal points for Florida’s victory.

The Gators will play the winner of No.18 Xavier and Connecticut in the Charleston Classic championship game on Nov. 24 at 8:30 p.m on ESPN.

Steven Walker is a beat writer for ESPN Gainesville and is currently studying Journalism & Sports Media at the University of Florida.
@swalker_7
Previous Florida’s Defense Ready to Show What It’s Made of Against FSU
Next Jaguars Look to Keep Playoff Hopes Alive Against Titans