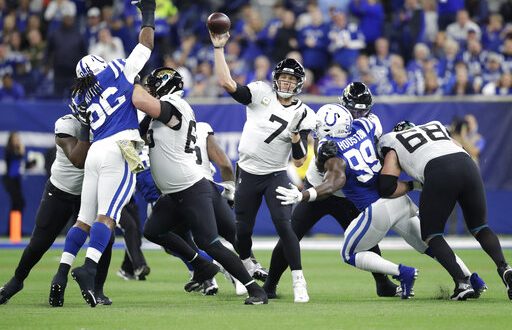 Jacksonville Jaguars quarterback Nick Foles (7) throws a touchdown pass during the first half of an NFL football game against the Indianapolis Colts, Sunday, Nov. 17, 2019, in Indianapolis. (AP Photo/Michael Conroy)

The Jaguars’ season has not gone as planned. Their offseason signing of Nick Foles seemingly promised a better season than last year.

Now, they are coming off of two straight bad losses, one to the Texans and another to the Colts.

With six games left, the Jaguars need just two wins to outperform 2018’s Jaguars squad. 5-11 isn’t the best measuring stick for the Jaguars success though, as Nick Foles is back and has a chance to get the Jaguars a Wild Card spot in a currently open but closing AFC Wild Card picture.

The Jaguars need to target the Raiders, as they are currently the lowest seed in the AFC Wild Card picture. It all starts with Sunday’s matchup against the Titans. It’s a must-win for the Jaguars if they want to stay in Wild Card contention.

Foles and Pass Rush are Keys to Win

Last Sunday vs the Colts, Foles completed 33 of 47 passes for 296 yards with two touchdowns and an interception. Foles did enough for the Jaguars to pull out a win, but both the Jaguars’ running game and their run defense didn’t do their jobs.

Foles is going to have to do more of the same if the Jaguars are going to pull out a win on Sunday.

The Jaguars’ pass rush getting to Ryan Tannehill is a big key for a win on Sunday. Last time the Jaguars played the Titans, it was on Thursday Night Football on September 19.

#TBT to 9 sacks in a 20-7 win against the Titans on Thursday Night Football. pic.twitter.com/1fzrGfFYz6

The Jaguars had nine sacks when they last played the Titans, and that was against a mobile QB in Marcus Mariota. This isn’t the same Titans team though.

This time, the Titans are led by Ryan Tannehill, who has performed well since filling in for Mariota. The Titans are 3-2 since Tannehill took over as starter.

The Jaguars’ pass defense is 8th best in the league with 219.3 yards allowed per game. Their pass defense will need to stop Tannehill passing deep down field, but Derrick Henry should be the main focus of the Jaguars’ defense.

Titans are Well-Rested and Coming Off a Big Win

On November 10, the Titans finished off a win in Arrowhead Stadium against the high-octane Chiefs.

Patrick Mahomes did all he could against the Titans, throwing for 446 yards and three touchdowns. But it wasn’t enough to offset Derrick Henry’s monster game.

Henry ran all over the Chiefs’ defense, touching the ball 23 times for 188 yards and two touchdowns. Asking Henry to do that again would be a lot, but it’s not outside the realm of possibility against the Jags’ 29th ranked run defense in the league.

The Titans beat the Chiefs with their run game, and Kansas City’s run defense is ranked 30th, one spot behind the Jags. Moral of the story: Derrick Henry feasts against bad run defenses.

The Jaguars are going to need to shut down Henry and get to Tannehill in order to win.

The Titans are favored by three points and the over-under is set at 41.5. Kickoff is set for 4:15 on Sunday.

My name is Caleb Mikita, and I am a telecommunications major at the University of Florida from St. Pete, FL. I am a fan of all things sports, but my main passion is baseball. My long term goal is to become a sports analyst or writer for MLB Network.
@@caleb_mikita8
Previous Gators Men’s Basketball Comes Alive, Defeats Miami 78-58
Next Browns, Dolphins Face Off in Highly Anticipated Clash

One of the few remaining players from the last coaching regime in Florida, Brett Heggie …