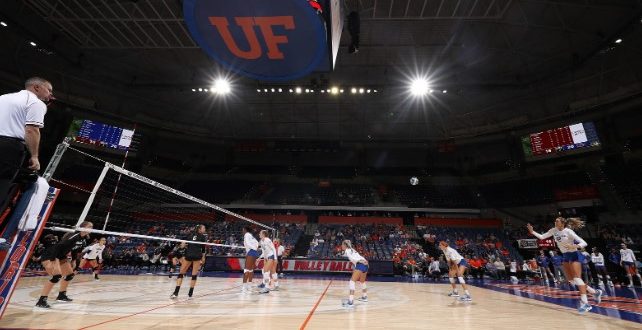 It’s not just the final home bout for Florida football on Saturday. And their seniors aren’t the only ones being honored.

Florida Gators volleyball finishes up the SEC and regular season schedules against the Texas A&M Aggies. The Gators will honor their seniors and a win helps Florida maintain a share of the SEC Championship.

A&M enters the match on a four-match winning streak and 10 of its last 11. They’ve only lost two sets over those last four matches with two victories in straight sets.

The Aggies are fifth overall in hitting percentage at .251 and tied for fourth averaging 13.68 kills per set. Senior outside hitter Hollann Hans leads the team with 460 kills and 4.51 kills per set this season.

That kills per set number is second-best in the Southeastern Conference. The senior from Corpus Christi, Texas also leads the conference with 49 service aces and is second in the league with 5.26 points per set.

Texas A&M is actually in the top five among SEC team in every category except digs:

Aggie’s junior middle blocker Makena Patterson is the league leader in total blocks (128) which translates into the most blocks per set in the league (1.36). Meanwhile setter Camille Conner is fifth in the conference, behind Marlie Monserez, with 9.79 assists per set.

Saturday will be the final regular-season home match in the orange and blue for the likes of Morgyn Greer, Chanelle Hargreaves, Rachael Kramer and Allie Gregory.

Gregory will finish in the top five on the career digs list as she is now fifth with 1,352 digs over her four years at the University of Florida. Her 514 digs in 2018 are the fifth-most in a season at Florida.

As of right now, Kramer is a three-time All-SEC middle blocker and currently holds the fifth spot in career hitting percentage at .404. The Phoenix native saw immediate playing time as a freshman, posting 176 kills and 81 total blocks in 88 sets played in 2016.

Chanelle Hargreaves played much as a freshman too. The Wharton High School product played in 90 sets in 2016, racking up 19 service aces. She’s been a service specialist over her career with 41 in her four years. She also made SEC Academic Honor Roll in 2017.

Morgyn Greer joined Florida as the Gatorade Texas Volleyball Player of the Year out of high school in 2016. She earned SEC Academic Honor Roll in 2018. She’s totaled over 100 kills in her career, including 66 her freshman year.

This senior class saw three tournament appearances with a likely fourth upcoming along with two shared SEC titles and a national championship appearance in its time in Gainesville.

The Gators will try to send them out in style Saturday afternoon.