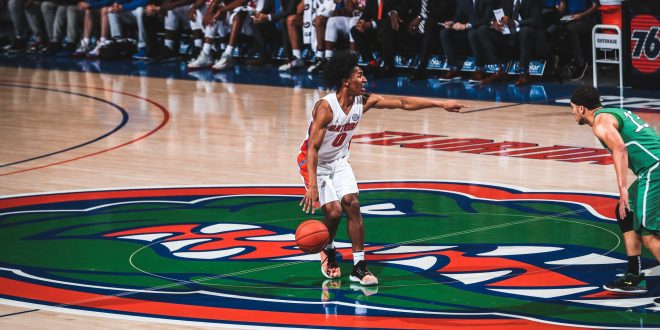 Florida's Ques Glover (0) dribbles the ball up the court on Nov. 29, 2019. Against Marshall, Glover scored his career-high with 14 points. (Credit @GatorsMBK on Twitter)

The Florida Gator men’s basketball team defeated Marshall 73-67 in a Black Friday match up in Gainesville.  This win extends the team’s win streak to four games, which goes back to a November 14 win over St. Joseph’s.

Ques Glover led the team in scoring with 14 points, his career-high. In his first four games this season, Glover scored two points; in his last four games, he’s scored 40 points.

Kerry Blackshear Jr. ended with 10 points but struggled with fouls throughout the game. With 7:53 to play in the second half, he picked up his fourth foul which caused him to go to the bench. Blackshear would foul out with 1:33 left to play and earn a technical foul.

The Florida Gators seemed to be tired from Thanksgiving food and Black Friday shopping to start Friday’s game.  Florida shot 30% from the field in the first half and 61% in the second half. The difference in the two shooting halves shows how streaky the Gators can be offensively, especially early this season.

The Gator bench stepped up when needed. In the first half, of the team’s 25 points, bench players scored 16 points. Florida’s bench ended with 25 total points but carried the load when starters struggled in the first half.

Florida struggled to score from three-point range early, going 0-10 in the first half. This changed in the second half, as the team shot 4-8 in a nice turnaround for the Gators.

Much of Florida’s second-half spark came about from tenacity on defense. Scottie Lewis recorded three steals and two key blocks in the second half, including this LeBron-Esque chase-down block.

Defense would turn into offense, as Florida capitalized off of the turnovers they created. The Gators ended with 18 points off of turnovers.

Additionally, Florida entered the bonus at the foul line with 14:10 left in the second half. This played a huge role in the Gators’ resurgence, as Florida ended up shooting 12 total shots from the charity stripe.

Entering the bonus allowed Florida to drive the ball inside with more tenacity. Marshall had to think twice when rotating on defense, as even a common foul took the Gators to the free-throw line.

This changed Florida’s dynamic on offense. Players like Andrew Nembhard would drive in the lane, take pull-up jumpers and dare Marshall defenders to foul them. Marshall’s fouls early in the second half spelled doom for them down the stretch.

Florida has a bit of a break coming up. Their next game is on December 7 away against Butler at noon. Coverage can be found on FOX.

Steven Walker is a beat writer for ESPN Gainesville and is currently studying Journalism & Sports Media at the University of Florida.
@swalker_7
Previous Gators VB Hosts Senior Day in Regular Season Finale
Next The Philadelphia Eagles and Miami Dolphins Set to Face Off Sunday 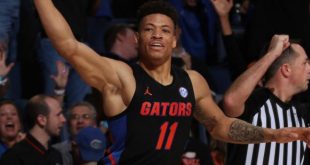