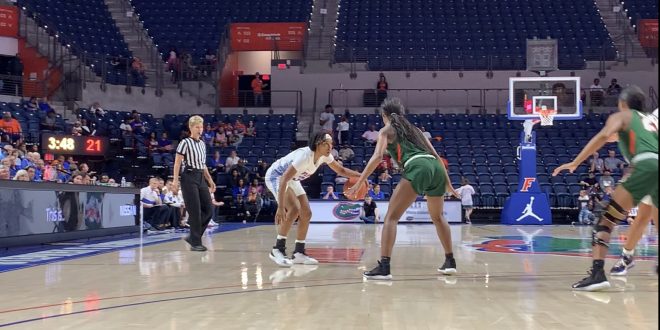 The Gator Women’s Basketball team faced the Florida A&M Rattlers on Sunday. After coming off of two losses against Indiana and Florida State, they powered through and picked up the 84-40 win.  This game featured four players that hit double digits, as well as a career-high for redshirt senior forward Zada Williams.

Head coach Cam Newbauer recognized that the matchup was going to be a challenge. With the lack of time to prepare for this game, Newbauer was unsure about how his players were going to perform.

In the end, he was more than satisfied with the strength of his team’s defense.

Zada Williams hit a double-double with a total of 22 points and 19 rebounds in this game. She led her team in scoring, making 11 of her 13 field goal attempts.

Even though the Florida Gators successfully outscored the Rattlers in every quarter, the fourth quarter was definitely the most intense. Florida outscored their opponent 24-3.

Zada Williams on fire today! She followed this field goal with another two-pointer in which she got fouled and still made the shot. She now has 20 points and after the timeout she will go on the free-throw line and try to add one more pic.twitter.com/hAZ15CGORn

Right behind Williams was freshman Lavender Briggs, with nine rebounds and 17 points. Briggs made two out of four of her three-pointers and was just shy one rebound in getting a double-double.

Towards the end of the second quarter @lavbriggs scored a three pointer for the Gators. @ESPNGainesville pic.twitter.com/Ci94g5lNgL

Another player that shined on the court today was sophomore guard Ariel Johnson. She scored 14 points making six out of her nine field-goal attempts and three rebounds.

Redshirt junior guard Kiki Smith also made it to the double digits, with 10 points and 5 rebounds. Smith led her team in assists with a total of five.

The game started with strong performances from both sides. The Gators got on the scoreboard early on the game with back to back points by Williams and Kristina Moore. The first quarter was tied four times with one lead change. Florida ended the quarter on top with a score of 19-12.

Johnson and Briggs shined during the second quarter, both scoring eight points. Briggs ended the first half already in the double digits, with 11 points.  The second quarter ended with the Gators still in the lead with 21-13.

In the second half, the Gators were able to outscore the Rattlers in both quarters. In the third quarter, they outscored Florida A&M 20-12. After that the Gators’ defense limited the Rattlers offense in the fourth quarter, holding them to only three points.

The next game for the Gators is going be away against Praire View A&M Dec. 5. Tip-off is set for 8 pm.