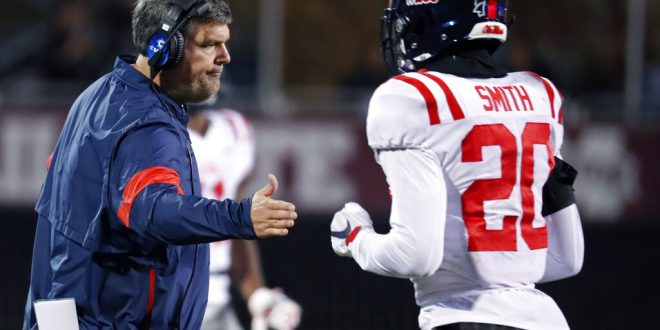 In this Nov. 28, 2019 photo, Mississippi head coach Matt Luke reaches out to Mississippi defensive back Keidron Smith (20) following a second half play during an NCAA college football game against Mississippi State, in Starkville, Miss. Mississippi has fired Luke, three days after his third non-winning season ended with an excruciating rivalry game loss. Athletic director Keith Carter said Sunday, Dec. 1, 2019 the decision to change coaches was made after evaluating the trajectory of the program and not seeing enough “momentum on the field. (AP Photo/Rogelio V. Solis)

With the conclusion of Ole Miss’ football season also came the dismissal of Rebels head coach Matt Luke. Luke concludes his three-year run as a head coach with a 15-21 record, struggling to top both non-conference and conference rivals.

Luke’s firing comes after another disappointing 4-8 season, a record that only seemed to get worse over time. In his 2018 season, Luke led his team to a 5-7 season compared to his 2017 season that ended 6-6.

The Rebels showed potential this season after recording lots of yards and points against strong teams like Alabama and LSU. Ole Miss were also close to get wins against California, Texas A&M and Auburn. But small mistakes inside the team slipped away those chances.

Ole Miss athletic director Keith Carter announced on Sunday the official dismissal of Luke with the statement below:

Carter also announced that the program will begin a search for the next football head coach. He is looking for someone who is focused on developing the program and getting wins.

“A search is underway to find a new head coach who can build a complete program that attracts top talent, develops them as young men and sustains a winning mentality.”

As of now, Carter announced that Rebels defensive coordinator and assistant coach Mike MacIntyre will serve as the interim coach.

Luke’s career with the Rebels

Although Luke has only been the Ole Miss head coach for three years, his career with the Rebels goes way back. His ties to the school go back three generations and it also became his alma matter after graduating in 2000. He was part of the football team as a walk-on and played center from 1995-1998.

After not being eligible anymore to play for the team, he still joined them as a graduate assistant in 1999. After coaching for a year in Murray State, he came back to Ole Miss as a offensive line/ tight end coach. He stayed there for three seasons before leaving the program once again. He came back for the 2012 season as a co-offensive coordinator/offensive line coach.

After that he was named interim coach for the 2017 season and by the end of it he became the official head coach. Luke started his role as head coach strong, taking over Hugh Freeze and finishing 6-6 including a win in the Egg Bowl. He saved a possible disaster season that year and won against rival Mississippi State. Because of those accomplishments, he was able to remove the interim tag and become the head coach.

Ole Miss’ 2019 season ended with five one-possession losses. With Luke’s season records dropping each season, a disappointing loss to Mississippi State was the last straw. With that 21-20 loss, Luke’s division record became 3-15 that include two wins against Arkansas and the one game that made him head coach.

Players’ reactions to the news

After the news, many different emotions from the players have surfaced. The Rebels were informed about Luke’s firing via a meeting that a few players walked out off. That action and comments from the players themselves have insinuated that they are willing to walk out of the team if Luke leaves.

Rebels offensive lineman Chandler Tuitt claimed that “half of the team” was willing to leave the team. According to Tuitt, if they dismiss the entire coaching staff, not a lot of players would come back. He made this comment following their meeting with Carter:

“But you realize, there’s no program without players,” Tuitt said. You’re basing stuff off the fans. “But we don’t care about the fans that much. I’m going to be honest. We’re here for the coach. We love football. If you don’t want to support us, that’s just your fault”

Another player who shared his feelings about Luke’s firing was center Eli Johnson who said that even though he is staying, others do not feel the same way.

“But that’s not the case with a lot of guys. A lot of guys came to school here because of coach Luke,” Johnson said. “They don’t have any ties to Ole Miss football. That’s what scares me is how are those guys going to respond to this?”

Other players have taken upon themselves to show that they are sad about the news, but they are still 100% with the Rebels. Sophomores Ben Brown and Jacquez Jones shared their thoughts through social media:

Even though many of the players might just be talking out of emotion, having the NCAA transfer portal now available to them might affect the team. Many of the players claiming to wanting to transfer may change their minds after the situation calms down. And it may not be half of the team like Tuitt claimed, but Ole Miss has many strong players, so any loss would greatly affect the program.

Camila is a senior at the University of Florida, who served as a beat writer for the women's basketball team from 2019 until the 2021 season. She was also a beat writer for the Gators football team during the 2020 season. Camila is also WUFT's news director as well as a sports reporter/anchor.
@CamilaMaffuz
Previous Seahawks Host Vikings in Important NFC Matchup
Next Former Florida Offensive Coordinator Steve Addazio Out at Boston College 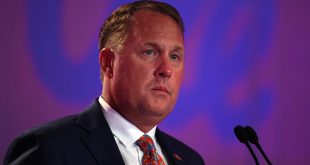