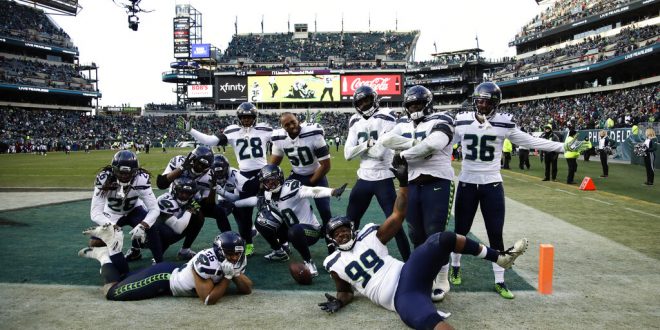 Seattle Seahawks defensive players celebrate during the second half of an NFL football game against the Philadelphia Eagles, Sunday, Nov. 24, 2019, in Philadelphia. (AP Photo/Matt Rourke)

The NFC playoff race is heating up as the National Football League concludes Week 13 tonight on Monday Night Football. The Baltimore Ravens took down the San Francisco 49ers, 20-17, in a game that some are calling a Super Bowl preview. The second marquee matchup of the week comes tonight, as the Minnesota Vikings (8-3) travel to play the Seattle Seahawks (9-2) in primetime.

With the 49ers loss on Sunday, the door is open for the Seahawks to take the lead in the NFC West. In the bigger picture, though, both teams are trying to keep pace in the wider NFC playoff race.

The Seahawks’ success this season is largely a reflection of Russell Wilson’s incredible season at quarterback. His 24 passing touchdowns rank second in the NFL behind only Lamar Jackson. If it weren’t for the unprecedented season Lamar is having with the Ravens, Wilson might be the frontrunner for league MVP.

Over the last two weeks, however, Russell has struggled. After throwing only three interceptions over the first 10 games, he’s now thrown two in the past two. Even still, the Seahawks have continued to win due to a resurgence on defense. Their defense has forced eight turnovers over the last two games against the 49ers and Eagles.

Russell will have to step it up if he wants to outpace a Vikings offense that’s proven they can put up points. An important game under the lights might just be the perfect place for him to do that.

Russell Wilson has been outstanding throughout his career under the lights.

Per @EliasSports, Wilson has the best win pct of any starting QB in night games since the 1970 merger.

On the other side of the ball, Dalvin Cook and Kirk Cousins have been giving defenses nightmares. Cook’s 1,472 yards from scrimmage trail only Christian McCaffrey for most in the league. His ability to run through defenses sets up the play action ability for Cousins. Offensive coordinator Kevin Stefanski continues to set the quarterback up for success with play action plays and bootlegs designed to give him more time to throw the ball.

Can Kirk Cousins keep his hot streak rolling on Monday Night Football against the Seahawks on ESPN?

Since Week 5, Cousins is top-4 in the NFL in Total QBR, completion percentage and leads the NFL with 18 TD passes. pic.twitter.com/GSDkZwO0tt

Don’t be surprised if you see Kirk air it out to wide receiver Stefon Diggs on a number of occasions in this game.

One half of the Vikings elite wide receiver duo, Adam Thielen, has been sidelined with a hamstring injury for weeks. Many were optimistic he’d be able to return for this game coming off a bye week. However, the team ruled him out early in the weekend.

WR Adam Thielen (hamstring) and DT Jalyn Holmes (not injury related) have been downgraded to OUT for #MINvsSEA.

Without Thielen, Cousins should target tight end Kyle Rudolph more often and get Dalvin Cook involved on the screen pass.

At this point in the season, when two great teams like this play, there’s bound to be important playoff implications. For the Seahawks, the stakes are even higher due to the 49ers loss on Sunday. That means if the Seahawks win tonight, they’ll advance to 10-2. Seattle will also have control of the NFC West due to the head-to-head tiebreaker.

For the Vikings, a win would move them closer to the top of the NFC North past the Green Bay Packers. Unfortunately for Minnesota, a Week 2 loss to the Packers means Green Bay will have the advantage of the tie breaker.

Either way, a win by either team will help bolster their playoff chances. A loss would be demoralizing at this point in the season.

One team will definitely be watching Monday night that you might not expect to be: the New Orleans Saints. If the Seahawks win, the Saints would be catapulted to the No. 1 seed in the NFC playoff picture.

I'm a third-year student at the University of Florida passionate about storytelling and sportswriting. My goal is to work in communications for a professional sports team after I graduate.
Previous Former Florida Defensive Coordinator Charlie Strong Out at USF
Next Ole Miss Fires Head Coach Matt Luke