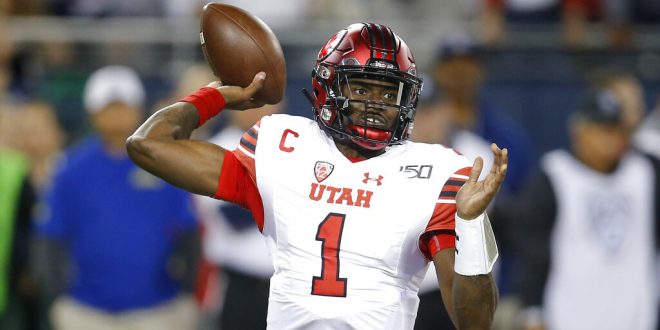 The College Football Playoff — that’s what’s potentially at stake for the fifth-ranked Utah Utes in the Pac-12 Championship Game. They’ll face the No. 13 Oregon Ducks In Levi’s Stadium on Friday at 8 p.m.

Both Utah and Oregon have senior quarterbacks that are must-watch television.

Tyler Huntley leads the Utes under center. The 6-foot-1 senior from Dania, FL, just like his football team, is ranked fifth in the country for QBR at 87.5. On the season, Huntley has thrown 16 touchdowns and just two interceptions.

Not only is Huntley efficient in his touchdown-to-interception ratio; he completes 75.5 percent of his passes. Overall, he has 2,773 total passing yards this season.

In addition to his prowess in the passing game, Huntley is also dangerous leaving the pocket. He has five touchdowns this season on the run.

Huntley’s counterpart is Justin Herbert. The six-foot-six senior is from Eugene, OR. Herbert is a pocket passer, and while his game is more one-dimensional thank Huntley’s, he does it very well.

Herbert isn’t as efficient on each down as Huntley, but he still has a respectable 67.5 percent completion percentage this season.

A big reason for Herbert’s success this season is thanks to his offensive line. One player in particular, sophomore left tackle Penei Sewell, recently was recognized for his consistent level of performance.

Changing the game. Sophomore left tackle and @outlandtrophy finalist @peneisewell58 is the @PFF_College Pac-12 Player of the Year. #GoDucks pic.twitter.com/1zH4LkHQ80

Utah is 11-1 on the season. Their single loss came to USC on Sept. 20 and ended 30-23 in favor of the Trojans. Since then, Utah’s won eight straight and has outscored their opponents 308-76.

The only ranked team the Utes have faced this season was No. 17 Arizona State. Utah handily defeated them 21-3.

The Oregon Ducks had a bit of a rough start to the season. They lost their first game to No. 16 Auburn 27-21. While a respectable loss, it still resulted in an uphill battle.

From that point, the Ducks won nine straight games before losing to Arizona State on Nov. 23 31-28.

The only other ranked team the Ducks faced this season was No. 25 Washington. Oregon won 35-31.

Oregon and Utah will kick off at 8 p.m. Friday evening.