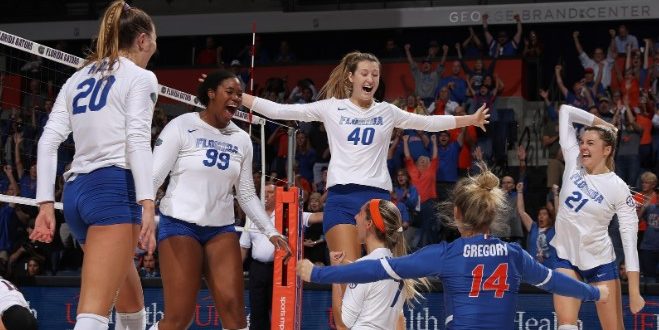 The Gators are back hosting NCAA Tournament games at home and start it off with a familiar postseason opponent.

Florida Gators volleyball opens the first round of the NCAA Women’s Volleyball Tournament Thursday night in the O’Connell Center. They’ll face the Alabama State Hornets at 7 p.m. in a regional bracket that also includes UCF and Florida State.

Florida celebrated its SEC co-championship after the match on Saturday. But there wasn’t a lot of time to do so. They only had until 8:30 Sunday night, that’s when the selection show started.

“Everyone’s record is 0-0 and every team is either coming off a great season or a great last win,” Wise said. “There’s a different feeling. And it’s not just Christmas it’s the high of playing in the tournament.”

Florida had plenty of tests this season with multiple five-set wins and losses. The SEC produced five other tournament teams in Texas A&M, Kentucky, Georgia, South Carolina and Missouri.

Florida faced each one of them in the regular season and right-side hitter Holly Carlton was grateful for that schedule.

Carlton on playing such a tough regular season:

But, this isn’t the regular season. It’s “win or go home” season. Carlton said there’s definitely an added pressure coming into this part of the year. But, a good way to combat that is with confidence.

“I think that this team has deserved the right to be confident in how we’re playing going into the tournament,” she said.

This is starting to become a trend for the Hornets. It’s the third time in four seasons they’ll start the NCAA Tournament in Gainesville.

What Wise expects out of ASU:

Penny Lucas-White’s team finished the season under .500 at 17-21, but won the SWAC Championship for the fourth consecutive year for another automatic bid to the tourney.

A few stats from the Hornets:

Furthermore, seeing the Hornets has become a trend for Rachael Kramer as well. The senior middle blocker saw them in 2016 and 2017. But, Kramer said even though the rosters might have changed the style of play still remains the same.

“They come from a conference that’s a little unconventional,” she said. “So sometimes that can be hard to play when tendencies aren’t always there. It’s definitely a first round matchup we have to be prepared and focused for.”

Although, Wise said the Hornets do some things similar to the other teams Florida faced this season. That helped them in the scouting process and gave the team time to improve themselves.

Wise spoke about the importance and effort of the crowds Florida’s had in the O Dome so far this season. Now she said they’ll need more support from the local fans than ever this season because of how unpredictable scheduling is.

But, regardless of crowd size, Florida needs to focus on one thing: winning. No more conference titles to chase or anything else. It’s tournament time. And winning is the name of the game.