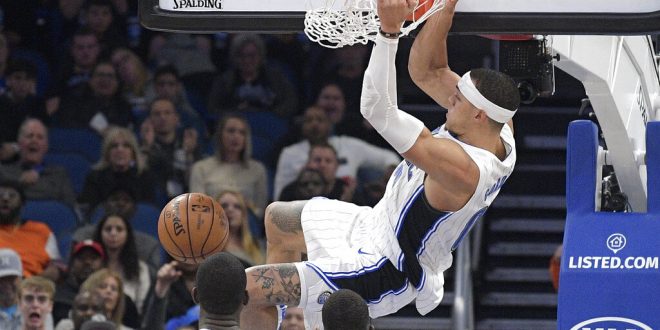 After starting the season off slowly, the Orlando Magic might be hitting their stride.

Orlando has won three straight games and four out of their last five. Their most recent victory coming in the form of a 128-114 victory over the Phoenix Suns. Aaron Gordon was unstoppable on Wednesday night as he scored 32 points while grabbing five rebounds and dishing out five assists. What is even more impressive is the fact that Gordon went a perfect five for five on three-point attempts.

Shooting the Lights Out of the Amway Center

One of the reasons why the Magic currently hold a 10-11 record is because they struggle to shoot on a consistent basis.

That was not the case on Wednesday night as three different Orlando players scored 20+ points. Terrence Ross contributed 22 points while Evan Fournier added 21 points. The Suns were overwhelmed by the Magics shooting as they shot 57.6% from the floor. Orlando was killing it from long range as they made 14 of 25 three-point attempts. The largest lead the Magic had at one point was 24. The hot shooting was enough to overcome the turnovers as the Magic lost the turnover battle 19-13.

Frank Kaminsky (23) and Devin Booker (17) combined for 40 points for Phoenix but that was not sufficient enough to keep up with the Magic. The 57.6% that the Suns gave up was their worst defensive performance of the season. To make matters worse, the Suns were outrebounded 45-29 on the night.

The Magic will be looking to extend their three-game winning streak on the road against the Cleveland Cavaliers on Friday night.

A win on Friday would give Orlando their longest winning streak of the season as they won three games in a row in November (11/13-11/17). Tip-off from the Rocket Mortgage FieldHouse is slated for 7 pm. The game can be seen on Fox Sports Florida.