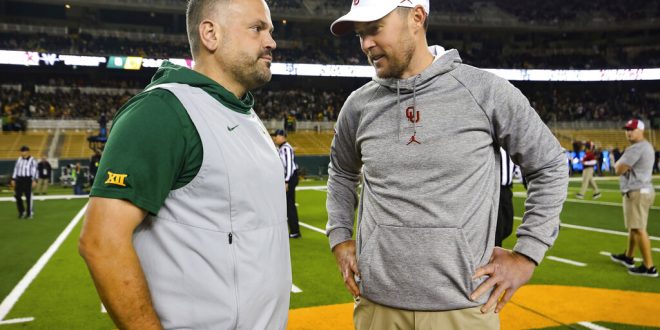 FILE - In this Nov. 16, 2019, file photo, Baylor head coach Matt Rhule, left, and Oklahoma head coach Lincoln Riley talk at midfield prior to an NCAA college football game in Waco, Texas. Rhule and Riley took over their teams under drastically different circumstances. Now they will coach against each other in the Big 12 championship game. (AP Photo/Ray Carlin, File)

Baylor and Oklahoma will face each other for the second time this season, this time in the Big 12 football championship game.

The first meeting was decided after a second-half, 24-point comeback; the second — set for Saturday in Arlington, Texas, at noon — will decide a Big 12 Champion and (possibly) what team will fill the fourth and final spot in the College Football Playoff.

The Bears, currently 7 in the CFP rankings, and the Sooners, currently ranked 6, both boast 11 and 1 records this season.

Baylor seemed to have the game won before opening the door to an Oklahoma offense led by former Alabama starting quarterback Jalen Hurts. But it was OU’s defense, which had been struggling and has been said to have kept them from becoming a championship team in the past, that kept them in the game with key turnovers. The Sooners’ final turnover of the day was a game-sealing interception with Baylor driving, ready to score for the tie or win.

Coaches on the Rise

Baylor coach Matt Rhule and Sooners coach  Lincoln Riley are both in their third season as head coaches at their respective universities.

Rhule was awarded the Big 12 2019 Chuck Neinas Coach of the Year year award. He also became the first coach to turn a team from 1 and 11 (in 2017) in his first season, to 11 and 1 in two seasons. Ahead of the championship game, Rhule wants to focus on one thing.

Coming into the Game

Baylor ended the regular season on November 30 with a 61 to 6 slaughtering of Kansas.

Oklahoma comes off a rivalry game win against Oklahoma State, 34 to 16.

The Sooners, the team that couldn’t quite do it on defense, finished the regular season with defensive turnovers on the final play of four-straight games. We’ll see if that remains true on Saturday.

Three years ago, the New York Jets drafted Sam Darnold with hopes of making him …