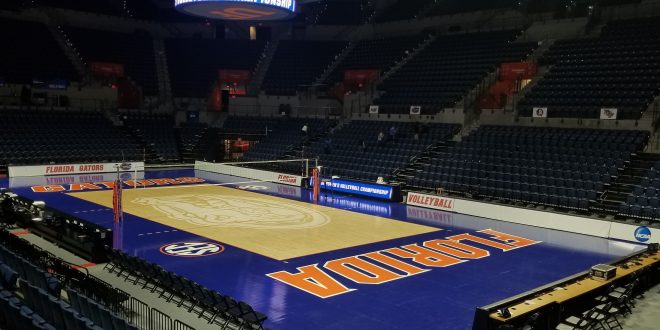 Thursday night was weird. From the lackadaisical crowd, to Thayer Hall’s absence  and then Florida seeming to be both in and out of control of its first round match.

Despite all of that, the Florida volleyball defeated the Alabama State Hornets in straight sets to advance out of the first round in the NCAA Volleyball Tournament. The Gators match up with the UCF Knights Friday night in the second round.

Set 2 proved a little bit of a scare with Florida falling behind 11-7 with several non-starters on the court. Gator coach Mary Wise had enough and called a timeout. Florida narrowed the lead at 15-14 after that. Now, enter Paige Hammons.

The junior from Louisville killed a ball to knot it up at 15 then went on a nine-point service run to pull away and make it 23-16 in the second. Florida won the game one kill and ASU attack error later.

Wise on Hammons stepping up:

The match’s final frame was probably its most even with neither team going on service runs of more than four points. Florida was held to its lowest hitting efficiency at .312 and ASU hit their highest at .200. Although, Wise’s squad took the final set 25-20.

Filling In for Thayer

Florida’s arguably best player not only didn’t play, she didn’t warm up or even dress out. The South Carolina native didn’t practice on Wednesday either. However, Wise kept it brief when it came to her status.

“She’s day-to-day but will be better tomorrow,” she said.

The Gator volleyball law firm of Hammons, Sokolowski and Carlton provided an effective representation. The trio combined for 27 of Florida’s 44 kills Thursday night.

Mia Sokolowski pitched in 10 kills like Hammons but only registered two digs and a block solo besides that. Carlton’s seven kills came on 10 error-free swings.

Wise said Sokolowski missed time due to some physical issues earlier in the year but had a good review of her performance.

“I thought she was really clean,” Wise said. “(She) hit the ball at a high contact point and did some really nice things.”

Sokolowski wasn’t the only one who saw more of the floor on Thursday. Florida played 12 different players including Paula Cerame, Riley Fischer, Chanelle Hargreaves, Darrielle King and Haley Warner.

Fischer actually started as a defensive specialist for Florida.

To channel Bill Belichick, the Gators are on to UCF. The Knights earned a five-set win over Florida State earlier Thursday in what Wise thought was a high-level match defensively. The match takes place on Friday night.

Wise on the dangers of second-round matches:

Going back-to-back nights might seem like a challenge but according to Wise there is no such thing as fatigue at this stage in the game. She’s more worried about how the Knights are feeling emotionally.

“We fully expect we’re going to a play a sky-high, hot and very, very talented UCF that’s on a roll right now,” Wise said. “A great challenge for us.”