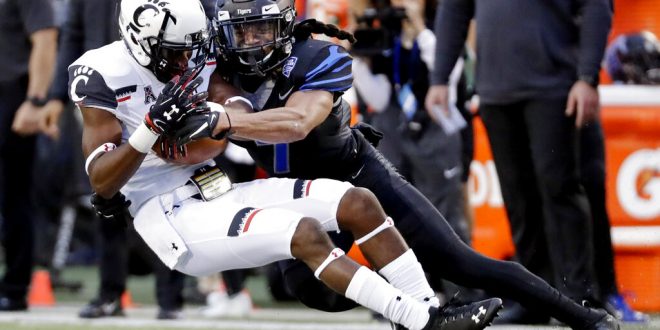 Cincinnati wide receiver Thomas Geddis, left, catches a pass as he is covered by Memphis defensive back Chris Claybrooks in the first half of an NCAA college football game Friday, Nov. 29, 2019, in Memphis, Tenn. (AP Photo/Mark Humphrey)

After a tough matchup last week, the No. 17 Memphis Tigers will take on the No. 20 Cincinnati Bearcats in the American Athletic Conference Championship. The match will be played in Liberty Bowl Memorial Stadium  on Saturday at 3:30 p.m.

During last week’s rival games around college football, the Memphis Tigers hosted the Cincinnati Bearcats for a must-win game to make their conference championship. In a hard-fought battle, Memphis defeated the Bearcats 34-24 to pick up their first ever 11-win season.

Despite the final score, Cincinnati played the Tigers in an extremely even, hard-fought game. Memphis was clinging on to a three point lead, 27-24, after Cincinnati’s Ben Bryan found the end zone on a twelve yard run. The Tigers then put the game away with an Antonio Gibson 29 yard touchdown run.

Offensively, Cincinnati could not be stopped by Memphis running the ball all last game. Bearcats running back Michael Warren torched the Tigers on the ground rushing for 122 yards and a touchdown.

On the other hand, Memphis found success in the air with Brady White. The 6’3, 215-pound Tiger quarterback threw for 222 yards and two touchdowns, while completing 57.7% of his passes. Brady White was the true difference maker for the Tigers and elevated Memphis to a level offensively Cincinnati has struggled to achieve this season.

Both Cincinnati and Memphis have key players that will impacts the outcome of the game.

Brady White has been the unquestioned leader for the Tiger football team this season. In his junior season, White has managed to throw 3,307 yard and 32 touchdowns to rank himself number eight in the country for touchdown passes.

Against ranked opponents, White has shown his true capabilities throwing a football. Memphis incorporated a ranked SMU featured on College Gameday and a No. 20 Cincinnati into their strength of schedule this season. During those games, Brady White played by far his best football by far throwing for five touchdowns and 583 yards.

Kenneth Gainwell is White’s partner in crime offensively for the Tigers establishing Memphis’ rushing game. The shifty, 6-3 Freshman was ranked eleventh in the nation in rushing  yards with 1,381 yard along with 12 rushing touchdowns. Averaging 6.8 yards per rush, Gainwell has been almost an automatic positive play for the Tigers all season.

Desmond Ridder is the sophomore leader under center for Cincinnati. The big-bodied 6’4, 215 pound quarterback has posted pretty average stats for the Bearcats throughout this season passing for 1,836 yards and 17 touchdowns. Last matchup against the Tigers, Riddler threw for a solid 229 yards but had two interceptions. Cincinnati needs a huge increase in production from Riddler if the Bearcats want any chance at beating Memphis this time out.

Despite not being a top runner in the country, Michael Warren II can be a huge difference maker for Cincinnati. The solid 225-pound running back has had very solid numbers throughout the yard with 2,061 yards and 12 touchdown. Warren made his biggest impact of the season last week with the Tigers posting over a hundred yards and a score. If Warren established a strong run game early, Cincinnati can be extremely explosive offensively.