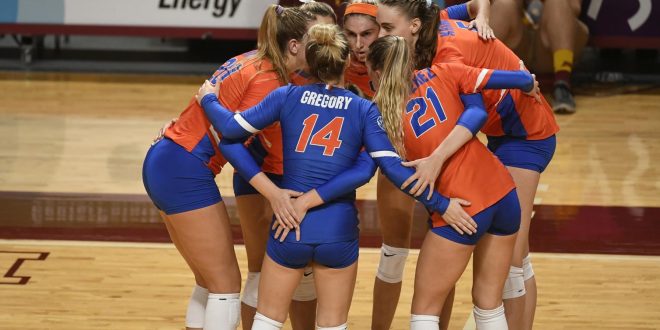 In a win or go home regional semifinal, the 10th ranked Florida volleyball fell to number seven Minnesota 3-2 in a five set match.

After missing round one of the tournament, the return of outside hitter Thayer Hall proved to be a huge gain for Florida.  The sophomore led the Gators with 17 kills and nine digs.

In the opening set, the Gators and Gophers matched each other point for point. Halfway through the set, back-to-back blocks from middle blocker Rachel Kramer put Gators up 15-12.

With the Florida momentum building, the Gophers quickly shut it down with a rally of their own.  Minnesota managed to cut the Gators’ lead to one, with Florida facing match point. Despite the Gophers late rally, Florida took set one 25-23.

Set two belonged completely to the Gophers. After opening the set with a four-point lead, the Gators quickly fell behind.  With a 14-8 lead, Minnesota took full control of the second set; holding the Gators to eight kills and a .000 hitting percentage, the Gophers took set two 25-14.

Florida continued to roll throughout the third set, taking it 25-16.

With the Gators up 2-1, Minnesota quickly deflated the Gators momentum, flashing their dominance once again in the fourth set.  Midway through the fourth set, the Gophers jumped out to a 14-8 lead. From there it would be all Minnesota who eventually took the set 25-15.

With the match tied two sets a piece, the Gator season rested on the fifth set.  Minnesota again jumped out to a quick lead 8-3 but a kill from Kramer followed by a block from Sokolowski cut the Minnesota lead to 8-5. Kramer ended the night with 15 kills.

But in the end, Minnesota takes the fifth and deciding game and moves on to a regional final.  The Gator season comes to a close with the loss.