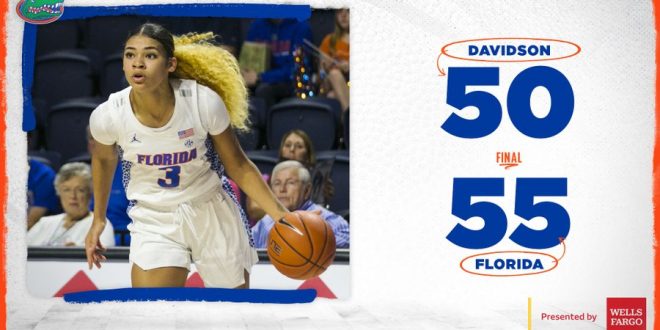 The Gator women’s basketball team pulled out a 55-50 win against Davidson on Sunday in Gainesville.  Florida’s record is now 9-4 on the season.

It was not the best shooting day for either team, with Florida only shooting for 34.5% for the game with just six made 3 point shots.  Davidson shot for 33.9% and made five 3 point shots.

Davidson outrebounded Florida overall in the game 44-42. However, they got in early foul trouble and at the half, four players for Davidson already had two fouls each.

The game got off to a slow start for both sides. The first score of the game did not come until five minutes in when Kiki Smith scored on a layup.

The game seemed to be another dominant one for Smith as at the quarter, she had seven of Florida’s 14 points. Like most of the game, the first quarter was a low scoring affair and ended at 14-11.

Struggling to shoot remained consistent for both teams through the second. With half the quarter gone, Florida had only added five points to their first-quarter score while Davidson had only added two points.

Late in the second though, things started to pick up. A three from Sara Konstans brought Davidson back within three. That was until a buzzer-beating three from Ariel Johnson that put the Gators back up by six with a halftime lead of 25-19.

The second half had a much quicker start and Smith got the Gators going early with a layup. Konstans did the same for Davidson with a quick three.  Davidson made their run in this quarter and late in the quarter went on a 7-0 run to bring them within two at 38-36 for the end of the third.

Lavender Briggs started off the game slow but turned it up in the second half. She scored 11 out of her 13 points during the second half for the Gators.

Coming into the fourth, it was anyone’s game. With less than five minutes left, Davidson tied the game 47-47. But that’s as close as Davidson would get as the Gators hung on for the tough home win.

The Gators will start off 2020 with their first game of SEC play. Florida will travel to Starkville to take on No. 15 Mississippi State on January 2nd.