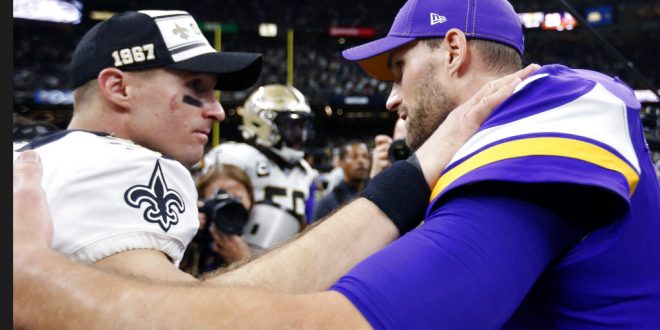 Vikings Look Ahead to NFC Divisional After Defeating the Saints

The Minnesota Vikings and New Orleans Saints capped off an NFC Wild Card matchup with a controversial 26-20 overtime victory for the Vikings.

Vikings quarterback Kirk Cousins threw his lone touchdown of the game to Kyle Rudolph in overtime to edge Minnesota over New Orleans. Regardless of the potential for a missed penalty call, the Vikings are moving on to the Divisional Round.

For quarterback Drew Brees and the Saints, this Wild Card loss adds to the list of frustrating postseason shortcomings.

Overtime losses in the postseason have troubled the New Orleans Saints over the past two seasons. In 2018, the Saints fell to the Los Angeles Rams in the NFC Conference Championship in overtime.

After a Conference Championship appearance last season, the Saints had expectations to match last season’s success. Additionally, with Brees recording the highest quarterback rating of his career at 116.3, the Saints offense appeared to have the advantage over the Minnesota defense.

The opposite proved to be true as the Saints made uncharacteristic mistakes. The Minnesota defense put the pressure on Brees, forcing a fumble and an interception from the veteran quarterback.

According to Brees, the Saints’ biggest struggle came from missing opportunities to make bigger plays.

What Went Right for Minnesota

After missing the playoffs last season, the Vikings Wild Card victory is a positive trend for a Minnesota team with a history of postseason slumps.

The Viking offense complemented the defense’s ability to create turnovers and shut down a talented Brees. Furthermore, the Minnesota running game put pressure on New Orleans.

According to Cousins, the victory is largely attributed to the success of the defense and the Vikings’ running game.

Additionally, Minnesota receivers proved to come up big in overtime.

Up Next for Minnesota

Vikings will take on the San Francisco 49ers in the NFC Divisional.

Previous Seahawks grind past hobbled Wentz, Eagles in wild-card finale
Next What’s Next for Brady?

After 20 seasons in the NFL, former Saints quarterback Drew Brees announced his retirement on …