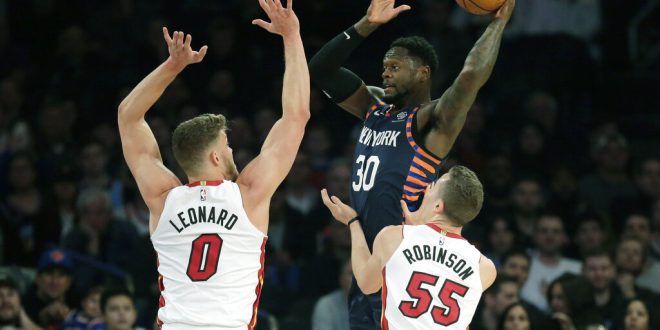 The Miami Heat lost 121-124 to the New York Knicks after losing their lead late in the fourth quarter. The Heat led throughout the whole game but were never able to capitalize on their momentum. This win over the Heat broke a five-game losing streak for the Knicks.

Miami was able to top the Knicks through the first three quarters but fell short in the fourth. New York outscored Miami by a score of 40-27 in the final frame. Miami entered this matchup as the no. 2 seed in the East, and the Knicks were without their top scorer, Marcus Morris. However, even with odds in their favor, the Heat were not able to stop the Knicks offense late in the fourth.

This is the second time the Heat have blown a lead late in the game during their stay in New York. The first time was against the Brooklyn Nets on Friday night. Miami was leading by 12 points going into halftime before losing to the Nets.

The Knicks have had a difficult season so far, only winning 11 games so far. In addition to that, one of their players, Julius Randle, suffered the passing of his grandmother.

But Randle did not let life’s circumstances stop him as he rose to the occasion in the fourth quarter, scoring 11 points in this quarter to help the Knicks take the lead.

“My grandmother left an incredible legacy and mark on my life and my family, so it has been tough. It’ll still be tough, but tonight was special and I really felt her out there the whole time”

Randle led his team in scoring with 26 points, followed by rookie RJ Barrett who scored 23. Small forward Jimmy Butler led the Heat with 25 points and 10 rebounds, followed by shooting guard Kendrick Nunn who got 20.

The Heat held a consistent lead for much of the game, but that consistency may have brought too much comfort for the Heat as their play dropped in the fourth quarter. The Heat entered the fourth quarter with a 10-point lead which would later be surpassed by the Knicks.

Randle came in clutch in the last few minutes of the fourth quarter, scoring eight points in the last two minutes. With 2:16 mins left, Randle stole the ball from Miami and made a three-pointer, giving the Knicks the lead. Heat’s power forward James Johnson responded with a three-point basket.

Randle followed this with a pair of free throws and a layup, which extended their lead to 122-119 with 34 seconds left in the game. Butler was able to tie the game on two occasions but failed to tie it once again on the 21-second mark. He was fouled on a three-point basket attempt but only made two of the three attempts from the stripe.

Barrett was then fouled and was able to extend their lead to 124-121. After that, Miami failed to tie the game. A three-pointer by Bam Adebayo was waved off because it was shot after the buzzer.

Next for the Miami Heat, they will host the San Antonio Spurs on Wednesday at 7:30 p.m.

Camila is a senior at the University of Florida, who served as a beat writer for the women's basketball team from 2019 until the 2021 season. She was also a beat writer for the Gators football team during the 2020 season. Camila is also WUFT's news director as well as a sports reporter/anchor.
@CamilaMaffuz
Previous Women’s Basketball Drops SEC Home Game Against Kentucky
Next Chiefs Bounce Back Against Texans to Advance to AFC Championship