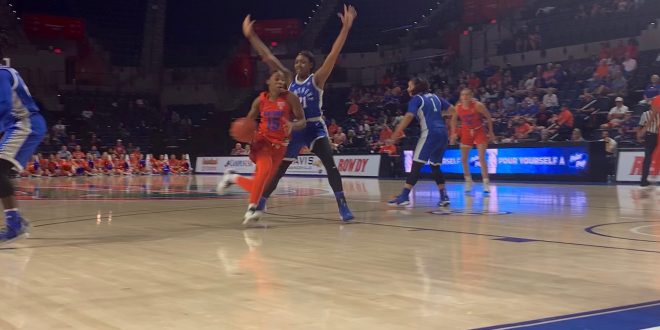 The Gator women’s basketball team is now 2-2 in conference play after losing 65-45 to the 14th ranked Kentucky Wildcats in Gainesville on Sunday.  The game started as a close one, with seven lead changes and a tied score on four occasions. It wasn’t until the second half that Kentucky was able to permanently keep the lead and extended it to 20 points.

The Gators were strong defensively at first and were even able to hold Kentucky’s leading scorer Rhyne Howard to just four points in the first half. But it didn’t take long for Kentucky’s offense to step up as they outscored the Gators in the second half 37-22. Howard led their offense by scoring 18 points on the second half.

Florida’s head coach Cam Newbauer said his team struggled at times both on offense and defense.

Kentucky’s defense was strong as they limited one of Florida’s top scorers, Lavender Briggs to only two points. Junior guard Kiki Smith led the Gator’s offense with 16 points, followed by sophomore guard Ariel Johnson, who got 10.

Despite being able to reach the double digits in scoring, Smith admits that the way they approached Kentucky’s defense could’ve been better.

“It was mostly us dribbling the ball on the sideline. I feel like it would have been a different game if the ball was in the middle, mainly me. I know I had too many turnovers and I just can’t do that.” Smith said. “It was just about me not making adjustments.”

The Gators will be back on Thursday when they host 23rd ranked Tennessee at 6.

The game had a very close start. Kristina Moore first put the Gators on the scoreboard with a two pointer. Kentucky was quick to respond with Jaida Roper tying up the game. Guard Kiki Smith fought for the Gator lead with a layup. 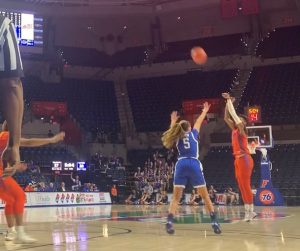 Chasity Patterson extended the Wildcats lead with a three pointer. Howard scored back to back to regain the Wildcat lead 7-6. Kentucky kept the lead for the rest of the quarter. The final period one score was 13-12.

in the second quarter, the Gators were able to take the lead four times but Kentucky was always quick to respond. The Wildcats finally took the lead with a little over a minute left in the half and kept it throughout the rest of the game.

The Gators struggled in both quarters of the second half, only scoring 11 points in each. They were struggling on defense as well as Kentucky did a better job offensively against Florida.

The Wildcats extended their lead late and won the game by 20 points.

Camila is a senior at the University of Florida, who served as a beat writer for the women's basketball team from 2019 until the 2021 season. She was also a beat writer for the Gators football team during the 2020 season. Camila is also WUFT's news director as well as a sports reporter/anchor.
@CamilaMaffuz
Previous Florida Men’s Basketball Falls to Missouri 91-75, Lose First SEC Game of the Season
Next Heat Fall to Knicks in Final Minutes