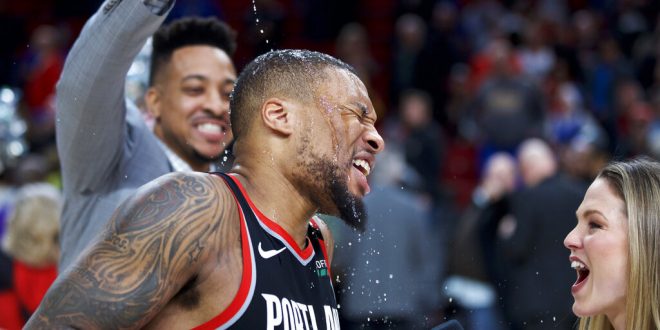 Damian Lillard and the Portland Trail Blazers wrapped up a huge 14-game Martin Luther King Day slate of NBA games the right way. The Trailblazers topped the Golden State Warrior 129-124 and Lillard dropped 61 points in the process. It was his career-high in points and it set a new franchise-record.

Hassan Whiteside also did more than pull his own weight for the Trailblazers with 17 points, 21 rebounds and six blocks. Whiteside has been averaging 15.5 points and 14.1 rebounds for Portland.

Portland’s next game is set for Thursday at 10:30 p.m. versus the Dallas Mavericks.

On the Warriors side of things, D’Angelo Russell and Alec Burks paved the way with near triple-double performances. Russell chalked up 27 points, nine assists, and eight rebounds, while Burks finished with 33 points, eight assists, and seven rebounds.

The Golden State Warriors are still without star guard Stephen Curry, who has only played four games this season due to a broken left hand. With lots of speculation surrounding Curry’s return, it is reported the team is looking to get him back on the floor this season with the start of March being the target.

Golden State’s next game is set for tomorrow at 10 p.m. versus the Utah Jazz.

Previous Gators Take a Tough Loss on the Road to No.12 Texas A&M
Next Overtime Thriller: Heat Top Kings 118-113