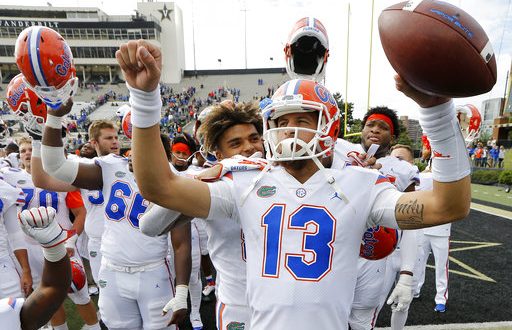 Up until Sunday, there wasn’t a quarterback on the Arkansas Razorbacks’ roster that had ever won a game in the SEC. That all changed when former Florida Gator Feleipe Franks announced his transfer destination.

After spending three years in Gainesville, Franks’ time as a Gator was cut short after the Crawfordville, Fla. native suffered a dislocated ankle on September 14, 2019 at Kentucky. While Franks was carted off of Kroger Field, Kyle Trask was buckling up his helmet. Little did anyone know, Franks’ season would be over and Trask would go 8-2 as a starter while arguably being the best returning SEC quarterback in 2020.

On December 1, 2019, Franks posted a graphic to his Instagram page announcing his decision to part ways with the University of Florida.

“It has been my dream to play at the University of Florida,” Franks wrote before thanking his coaches, teammates and fans. “My heart is heavy… There will be a lot that is missed. I plan on exploring my options of entering the NFL draft or playing my final year elsewhere.”

According to reports, prior to Franks’ visit to Fayetteville, he also visited Kansas. Rumors were swirling that Franks was also in contact with Washington State prior to Mike Leach leaving for Mississippi State.

Franks’ decision came on Sunday evening in the same fashion he had announced his departure. “New beginnings,” he wrote.

However, Franks’ new destination isn’t just a “new beginning” for him, but Arkansas’ football program as a whole. Back in November, the Razorbacks fired Chad Morris after his combined 4-18 record as head coach. Less than a month later, Fayetteville welcomed their new hire, Sam Pittman, with open arms.

Pittman is coming off a four year stint with the Georgia Bulldogs where he served as the offensive line coach and associate head coach to Kirby Smart. Prior to his time at Georgia, Pittman served similar roles to Arkansas in 2013-15.

However, what is likely more important to Franks, is the addition of Kendal Briles to the Razorbacks’ staff.

Formerly serving as the offensive coordinator at Florida State, Briles is sure to bring an explosive offense to Fayetteville. Before his time at FSU, Briles was head of Houston’s offense and helped the Cougars rank in the top-10 in total offense. At Florida State, Briles took had his hands full with a struggling offense. However, he still managed to help the Seminoles improve in most facets of the offense.

Coming to Arkansas as a grad-transfer, Franks should be immediately eligible. And in videos posted to his social media, he appears to be recovering well from his season-ending injury in September.

And while Franks joins a quarterback room with five other quarterbacks, there is a growing confidence that the Razorbacks will find a starter in the former Gator. Arkansas’ 2020 season gets underway on Sept. 5 with a game against Nevada. The Razorbacks also play Notre Dame in 2020 in addition to their stout SEC West slate.

Ainslie is a journalism major at the University of Florida where she specializes in Sports Media. Her main passion is college football as it was a huge part of her childhood. Ainslie serves as a current correspondent for the Ocala Star-Banner, a newspaper for the Ocala, Florida area. She currently covers Marion County high school sports.
Previous Overtime Thriller: Heat Top Kings 118-113
Next Orlando has the Magic in them