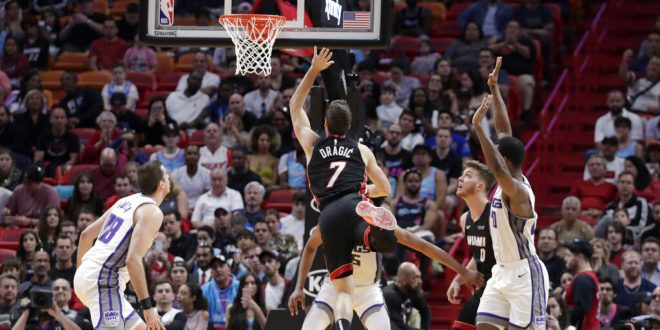 Miami Heat guard Goran Dragic (7) shoots during the first half of an NBA basketball game against the Sacramento Kings, Monday, Jan. 20, 2020, in Miami. (AP Photo/Lynne Sladky)

The Miami Heat improve to a 30-13 record after topping the Sacramento Kings 118-113 in overtime on Monday.

With 1.9 seconds left and Miami facing a rare last  second-loss, Heat guard Goran Dragic threw a perfect lob and Adebayo made the basket to tie the game. This play forced overtime, where the Heat were able to pull out the win in front of 19,600 fans in Miami.

The Heat’s next game is set for this Wednesday versus the Washington Wizards at 7:30 p.m.

The Kings grabbed 16 offensive rebounds and outscored the Heat 25-8 in second chance points despite shooting 41.9 percent from the field. It was Miami’s fourth quarter effort that forced the game into overtime and eventually into a loss for Sacramento. This loss puts the Kings on a five-game losing streak.

The King’s next game is set for tomorrow at 7 p.m. versus the Detroit Pistons.