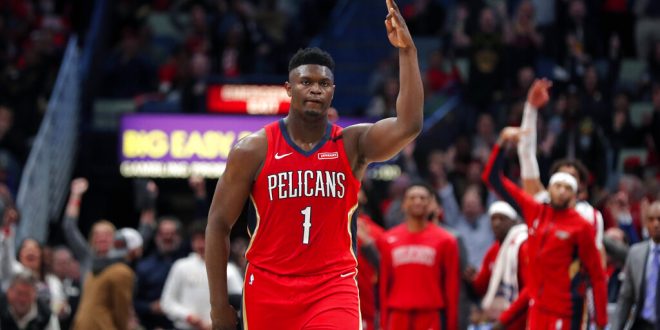 The No. 1 overall draft pick Zion Williamson in the 2019 NBA Draft made a splash in his NBA debut with the New Orleans Pelicans in a loss against the San Antonio Spurs Wednesday night.

In just 18 minutes of on the court action, Williamson earned himself 22 points supported by seven rebounds and three assists. A majority of Williamson’s points came in his final three minutes and eight seconds of play. The young rookie scored 17 consecutive points in the fourth quarter before he was taken out with 5:23 left in the game.

This scoring explosion brought the Pelicans into a brief lead following a double-digit deficit. The rookie started his fourth-quarter tear with a three-pointer and went on to hit three more. Williamson was 4-4 on threes, 8-11 on field goals and 2-4 on free throws. The Pelicans relinquished the lead after Williamson was replaced, losing the game 121-117.

Last night was Williamson’s first regular-season game in a Pelicans uniform. The rookie endured a torn right lateral meniscus in a pre-season game against the New York Knicks. Williamson underwent surgery on his knee on October, 21 earlier this year expected recovery in six to eight weeks.

However, Williamson did not make his return until last night, almost 14 weeks following his surgery. Despite the delayed return, Williamson still regards his NBA debut as a dream come true. Williamson is happy with his performance but believes he can do more to help the team gain a win next time.

It is no question that fans were excited to see Williamson back on the court in last night’s game. For many fans and Williamson himself, the long-awaited return was cut too short. However, head coach Alvin Gentry supports the decision to take Williamson out.

Gentry explained that they are playing a long-game with Williamson. This means they want to preserve Williamson’s longevity with the team and in the NBA. While Gentry understands both the fans’ and Williamson’s frustration with the limited playing time, he thinks it is best for the 19-year-old’s physical well-being.

Williamson also understands the reasons behind the choice to limit his time on the court. While he said he would love to run to the scorers’ table and check-in, he is also looking long-term.

The Pelicans play again Friday at home against the Denver Nuggets at 8 p.m., hopefully with Williamson back on the court.