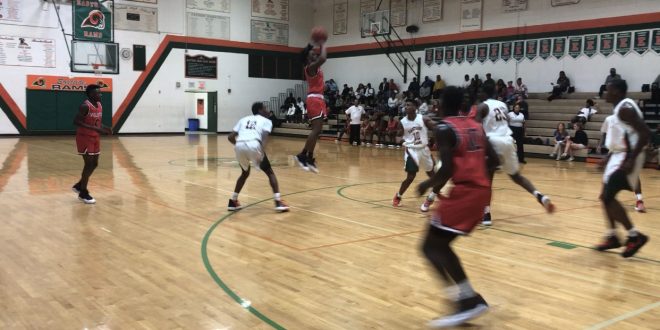 The Williston Red Devils fell to the Eastside Rams 69-44 on Friday night. The Rams completely took over the game in the second half, outscoring the Red Devils 40-21. With the loss, Williston’s record goes to 13-8, while Eastside rises to 15-7.

The Red Devils started out incredibly slow, scoring just 10 points in the first quarter. They dug themselves an eight-point hole that they were unable to crawl out of. Most could tell which way this game was going to go after the opening possession. Eastside won the tip and immediately settled into their offense. They moved the ball around with ease, leading to a wide-open three-point shot, the first of five threes given up by Williston in the first half. They simply didn’t have an answer for the Rams offensive attack.

To say that the Red Devils played poorly in the second half is an understatement. They were pushed around on both ends of the floor, but especially on the defensive end. The Rams had their way in the paint all game long, and Williston did not have an answer. They couldn’t buy a bucket offensively and were completely undisciplined defensively. Williston scored just seven points in the third quarter, the same amount as Eastside’s KJ Bradley scored by himself.

The tension was evident on the Williston bench for most of the second half, and it finally boiled over in the middle of the fourth quarter. A Red Devils’ player was subbed out of the game, down more than 20, and was clearly upset. He took off his jersey and stormed out of the gym, quickly followed by one of his coaches. He did not return for about five minutes, and came back still upset, sitting at the end of the bench in silence.

A player for the Red Devils was just subbed out of the game, down BIG late. He responded by shedding his jersey and walking out of the gym, visibly upset. @ESPNGainesville

Bradley was all over the floor in this one, making his presence known on both ends of the floor. He dropped 25 points; 18 of those coming in the second half alone. On the defensive side, he played like a shut-down corner in football. Nobody was getting by him. This block in the third quarter sums up his dominant performance perfectly.

Vicious block here by KJ Bradley for Eastside. Red Devils getting abused inside, now down 11 pic.twitter.com/yf3Zrc8ys8

The junior guard scored 14, leading the way for the Red Devils. He knocked down four shots from beyond the arc, and was the lone bright spot for the team tonight.

The Red Devils have just one game remaining in the regular season. They will play Crystal River on February 4. While their overall record isn’t great, they have a very strong district record and will be a high seed in the playoffs regardless of what happens next week.

Michael Hull is a sophomore at the University of Florida and is currently studying Journalism & Sports and Media.
@Michael_Hull33
Previous Strong Defense, 3-point shooting carries Eastside to win over Santa Fe
Next Gators Down Wildcats to Remain Only Undefeated SEC Gymnastics Team