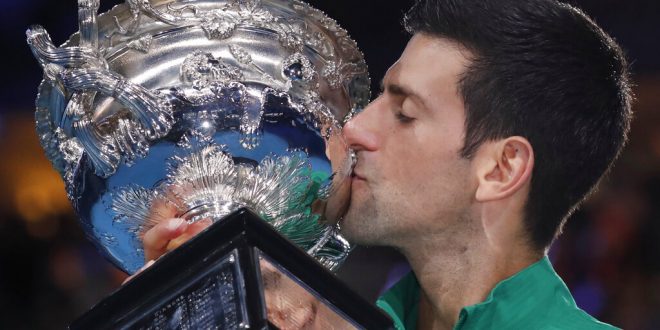 One of the world’s greatest tennis players returned to his perch atop the tennis world. Novak Djokovic secured his eighth Australian Open title on Sunday night, marking the second consecutive year the Serbian has won the tournament.

For Djokovic, there was no better way to begin the 2020 season.

The victory also gave Djokovic his 17th Grand Slam, but he is not concerned about the numbers.

With the hot sun beaming down on the hardcourt, the matchup became a tense, back-and-forth affair. At one point, Djokovic looked slower than normal and took a visit from medical staff. He reported symptoms that he found out likely indicated dehydration. However, Djokovic powered through and took the next two sets to cap off his victory.

Djokovic reveals the reasoning behind his medical timeout.

After winning the first set, Djokovic lost the next two sets. Despite the 2-1 deficit, the veteran stormed back and won the next two sets. The title launched Djokovic back into the No. 1 ranking ahead of Rafael Nadal, 33, who holds two more Grand Slam singles titles than the 32-year-old.

It was another key championship in a storied career, and while this title was no easy accomplishment, Djokovic won’t take time just yet to reflect on his achievements.

After three years, Oliver Crawford has decided to go pro. The young athlete caught up …