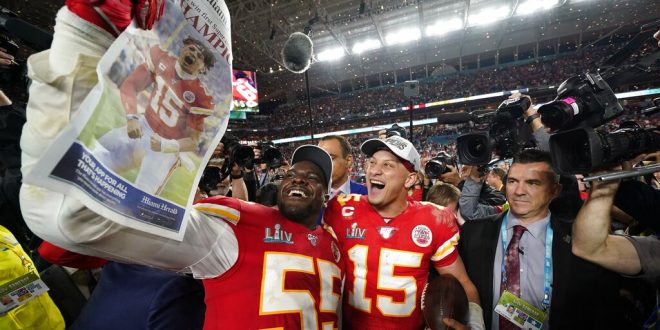 The Kansas City Chiefs become Super Bowl LIV champions after a 31-20 victory over the San Francisco 49ers. This victory came after the Chiefs hadn’t even made a Super Bowl appearance in the last 50 years.

The San Fransisco 49ers have made five appearances in the Super Bowl, their last one being back in 1994. San Francisco had a perfect Super Bowl record as they won every single time they went. But this sixth appearance was not theirs to have.

The matchup was close as the teams went to their locker rooms tied at 10 in halftime. When they came back, the 49ers’ defense was fired up as they were able to get signature stops and two interceptions in the second half. Their offense was also on a mission. They scored a touchdown and a field goal to lead the Chiefs by double digits.

Despite zero points and minimal stops in the third quarter, the Chief’s offense led by quarterback Patrick Mahomes did not call game over yet. They entered the fourth quarter and quickly got fired up.

The Chiefs got their first score of the second half with a 1-yard touchdown pass to Travis Kelce with 6:13 left. After that, Mahomes found running back Damien Williams for a five-yard touchdown with 2:44 left in the game.

To seal the win, Williams rushed for 38 yards all the way to end zone to give the Chiefs their third touchdown of the fourth quarter. San Francisco still had hopes of coming back and kept fighting until the end. But these hopes were shattered after a pass by 49ers quarterback Jimmy Garoppolo was intercepted with just a little over a minute left in the game.

Mahomes was named Super Bowl LIV MVP and became the youngest player to do so. He finished the game with 286 yards and a 0.62 completion percentage.

The former Texas Tech quarterback was drafted by the Chiefs back in 2017 and quickly made an impact on the team.

At first, the quarterback was feeling all of the pressure as his passes were coming off sloppy. His offensive line was also struggling to get stops, resulting in at least two sacks. But giving up is something that we have never seen from the young quarterback.

Despite having a slow start, Mahomes led his team to victory with three touchdown passes in the fourth quarter. Mahomes is known for his urge to keep fighting and he says that he believes in his team and that he won’t stop competing until the clock hits zero.

If the Chiefs have shown us something this postseason is to never call game over, even if they are trailing by double digits. It all started with the Division Round in which the Chiefs got the victory over the Houston Texans. The Texans outscored the Chiefs 21-0 in the first quarter of this game. But Kansas came back in the second and got the 28-24 lead. After that, it’s all history as the Chiefs won by double digits, 51-31.

Then it was the Tennessee Titans’ turn to try and stop the Chiefs in the AFC Championship. They led Kansas in the first, 10-7 but it didn’t take the Cheifs long to outscore them in the second and earn a 35-24 victory.

The Chiefs were led this season by head coach Andy Reid. This not only marked the end of the Chief’s Super Bowl appearance drought, but it also marked Reid’s 222nd victory. This is Reid’s seventh season as the Chiefs head coach, his 21st as an NFL coach.

Reid says that last year’s loss to the Titans in the Wild Card round ignited the spark that they needed to be victorious this year.

“This offseason, they put their mind into it, as did the coaches and every up their game. And this is the result.”

San Fransisco was named the number one seed in the regular season. They also entered the field favored against the Chiefs. Their strong offense was ranked number two in fewest yards allowed, with 281.1 yards. They also appeared in the top five in both rushing yards and total yards.

Garopollo says that his hopes are still up to bring the 49ers another Super Bowl ring. He recognizes the potential his young team has and is ready for what their next season brings.

Camila is a senior at the University of Florida studying Telecommunications with a specialization in production and a minor in Innovation. She is also seeking a Sports Management certificate. Camila is also WUFT's news director as well as a sports reporter/anchor.
@CamilaMaffuz
Previous 49ers Mourn The Super Bowl LIV
Next Novak Djokovic Wins Australian Open