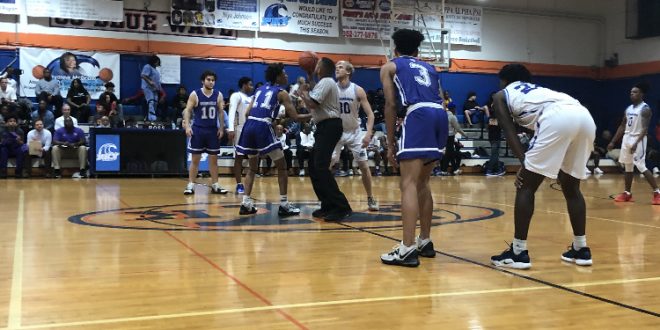 The P.K. Yonge boys’ basketball team is starting to make a habit of losing close games, as Tuesday’s 66-64 loss to Gainesville became their eighth loss by single digits out of 12 total. It was also their second two-point loss to Gainesville of the season, having dropped the first 65-63 on Dec. 6.

After the game almost got out of hand from P.K. Yonge in the third quarter, it was a back-and-forth affair between both teams in the fourth. Once the Blue Wave cut the lead down to 55-52, the teams traded scores for the remainder of the period, always staying a one-score game.

Blue Wave guard Adrian Bloodworth hit a three-pointer to put them ahead 56-55, their first lead of the game since 8-6 in the first quarter. After Gainesville answered back with a quick three-pointer to go ahead 58-56, Deontae Mavin went to work, scoring two back-to-back layups, with a Hurricanes free throw in between.

Once again this P.K. Yonge score was answered by Gainesville, but the Blue Wave had a response for themselves. This time it was in the form of a three-pointer by Adrian Bloodworth, his fourth of the night.

Adrian Bloodworth (@worldwideadrian) comes up big in the clutch once again for the Blue Wave, hitting this three-pointer to put PK Yonge up 63-61 on Gainesville with under two to go.@ESPNGainesville @ThePrepZone pic.twitter.com/vCvlvnu6Kb

Alas, this would be P.K. Yonge’s last lead of the night. After Gainesville converted an and-one to go up 64-63, Bloodworth had a chance to give his team the lead at the line, but he only made one of two free throws. Gainesville received the ball with 14.3 seconds remaining, but promptly turned it over.

Gainesville turns it over with 8.0 seconds remaining. PK Yonge will have a chance to win the game, tied at 64.@ESPNGainesville @PKYBasketball @ThePrepZone pic.twitter.com/K41HrGR7eh

P.K. Yonge seemed poised to either win the game or at least take it to overtime, receiving the ball with 8.0 seconds left at 64-64, but they also immediately turned the ball over.

PK Yonge turns it over on the inbounds play, and #32 Kinzon Hutchinson of Gainesville lays it in to win the game 66-64. PK Yonge’s desperation three falls short and they fall to 12-12 on the season, while the Hurricanes improve to 13-11.@ESPNGainesville @ThePrepZone pic.twitter.com/NYIDMhfANR

The inbound pass was intercepted and Kinzon Hutchinson easily put it in the basket to put the Hurricanes up 66-64. Bloodworth’s desperation heave was no good, and the Blue Wave fell to the disbelief of the home crowd.

“I drew up an opportunity for one of our guards, either Adrian (Bloodworth) or Greg (Maxwell) to get the ball and push it,” head coach Boderick Johnson said on the final play. “I set my two best shooters who had been hitting all night, Diontae Mavin and Danny Dawson, on the wings so that they penetrated and kicked out to take the last shot.”

The first two quarters of the game played out much like the final period did. An initial 5-0 P.K. Yonge lead was the only time in the first quarter that the game was a two-score game. It was a tied game 12-12 after one.

The second quarter was much of the same until Gainesville hit a near half-court shot at the buzzer to give the Hurricanes a 33-27 lead going into the break.

The third quarter is where things almost unraveled for the Blue Wave. The momentum from that buzzer beater carried over into the second half, as Gainesville went up 41-30 a couple minutes into the half, thanks to a 14-3 run.

Johnson prides his team on their toughness, however. They were able to tie up the game before quarter’s end at 45 apiece before going into the fourth down 48-45.

“The fight and resiliency we showed is the best positive to come from this game,” Johnson said. “Showing that once they locked in on defense, good things can happen.”

Star players step it up

After going scoreless in the first half, Adrian Bloodworth willed his team back in the second putting up 17 points and four threes to lead all scorers.

After a scoreless first half, Adrian Bloodworth (@worldwideadrian) came to life in the third quarter, scoring 10 points and helping cut an 11-point deficit to just three by quarter’s end.

At halftime against Gainesville, PK Yonge trails 33-27, giving up consecutive threes to break a 27-all tie.

Danny Dawson leads the Blue Wave at the half with 10 points and two three-pointers, including this one in the second quarter.@ESPNGainesville @PKYBasketball @ThePrepZone pic.twitter.com/555BnEMxJP

Christian Norman and Deontae Mavin each scored 13 points for P.K. Yonge. Mavin scored nine of those in the final period, shooting 5/6 from the floor. Aaron Small (5), Greg Maxwell (2) and Josiah Dye (2) also all contributed to the scoring.

P. K Yonge Blue Wave #24 Aaron Small with a clutch layup to bring the game within 2 points against the Gainesville Hurricanes in the second quarter 25-27 @ESPNGainesville @ThePrepZone pic.twitter.com/MSUHTg93Da

Gainesville moves to 13-11 with the win. Their final regular season game is against 16-7 Eastside at Santa Fe College.