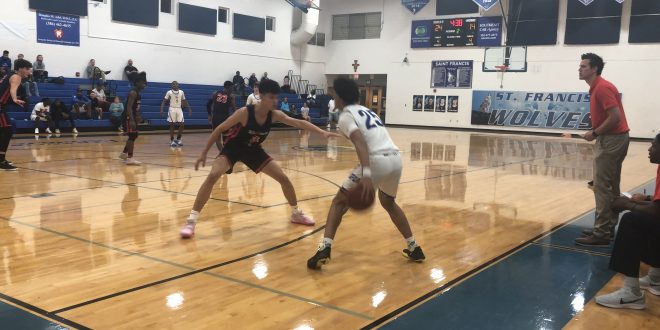 The St. Francis Wolves lost to the Windermere Prep Lakers on Tuesday night, 81-65. The Lakers improve to 22-3 on the year as they continue their dominant season. As for the Wolves, they will fall to 14-10 with one game left to go in their regular season. The difference in this one came in the second quarter where Windermere outscored St Francis 32-20. The Wolves were unable to recover.

The Wolves attempted to mount a huge comeback in the second half. They fell behind by as much as 23 in the third quarter. But, St. Francis was able to work the deficit to 14 after Aidan Newman hit a three from Steph Curry range.

Aidan Newman hits from DEEP at the end of the third quarter to cut into the Laker lead.
With one quarter left, it’s 61-47, Windermere pic.twitter.com/fZlpgFBFRG

The comeback continued in the fourth quarter as Nate Duran got hot from deep. He knocked down three shots from beyond the arc in the final quarter alone, including one to put the Wolves down single digits. Duran ended the night with 13 points, 11 of those coming in the fourth.

That was the closest the game would get, however, as the Lakers brought the hammer down late. While the last ditch effort by the Wolves brought energy into the gym, but still resulted in a loss.

Yepez led the Wolves in scoring dropping 25 points. He came out firing early and often scoring 14 points in the first half. He followed that up with an equally impressive second half scoring 11. Yepez was St. Francis’ most impressive player on the floor and it was not close.

Williams came up clutch in the fourth quarter for the Lakers. He scored seven points in the final period, knocking down five free throws in the final few minutes. He finished with 25 points, propelling the Lakers to their ninth win in a row.

Windermere wrapped up their regular season with the win over the Wolves and they will start to look towards the postseason. As for St. Francis, they have one more home game taking place on Thursday night against Episcopal High School from Jacksonville. The Wolves will start the playoffs next Monday, as the District tournament will begin at Meadowbrook academy in Ocala. Currently, St. Francis is slated as the number one seed and will try to make a run deep into the postseason.