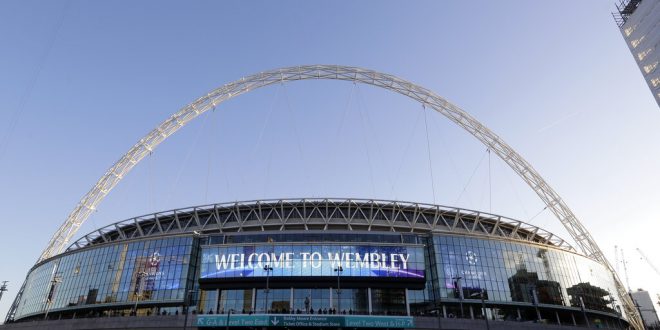 FILE - This Oct. 3, 2018 file photo shows a view of the exterior of Wembley Stadium in London. The Jacksonville Jaguars will play two home games in London next season, strengthening the franchise’s foothold in an overseas market the NFL is eager to expand. The Jaguars will play back-to-back games at historic Wembley Stadium, giving them a potential “home-field” advantage in the second one since they won’t have to travel that week. Specific dates were not announced.(AP Photo/Kirsty Wigglesworth, File)

The Jacksonville Jaguars announced that they will be incorporating an additional home game across the Atlantic, London, in this upcoming 2020 season.

The Jags have come up with a marketing strategy aimed to bring more local revenue for the organization in 2020, and also keep the franchise in its Jacksonville. Nonetheless, Wembley Stadium in London will be the Jaguars’ home for both games helping the franchise in the long run.

The Jaguars are familiar with the London area having played a home game every season since 2013.

Adding another home game in London will make the Jags the first team in NFL history to play two consecutive games outside of the United States for the regular season. Also, the franchise will be the first to play seven  consecutive NFL games in the exterior.

According to ESPN, Owner Shad Khan said that adding an additional home game will be a smart move for the organization. It will double last season’s their revenue.

The second game will be key to execute this strategy as they draw more viewers and fandom abroad. The Jacksonville Jaguars aim to arise from the bottom of the barrel in terms of league revenue and become a efficient business. And it looks like going abroad is the answer.

At the end of the 2020 season, the contract with NFL and Jaguars playing a home in London will run its course. Why? because the NFL  has declined the offer due to having a bargaining agreement with the players that ends after the 2020 season.

Sounds like a lot of traveling right, but these two home games will be held in back-to-back NFL Sundays. The dates for the games have not been announced yet, but they plan to announce match up dates and more information in April. This will give the fans the opportunity to take action if they would like to travel to watch the games and purchase tickets.