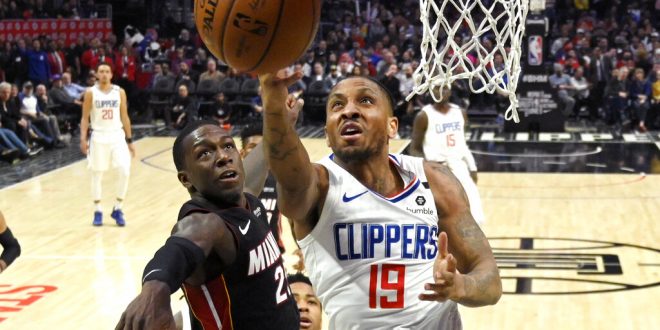 It’s not an uncommon issue in the Eastern Conference. But for a team trying to climb higher than the fourth seed, losing on the road is a huge roadblock for the Heat. The start of Miami’s west-coast trip was inauspicious as they lose to the Los Angeles Clipper 128-111.

The Heat looked like they had a chance leading at the half, but a lopsided third quarter, where the Clippers outscored them 37-22, did them in. They went from leading by three at the half to lose by 17. Bam Adebayo was the only starter to score more than 15 points (he had 22 points) for the Heat. Derrick Jones Jr. scored 25 off the bench to pick up the slack, but it wasn’t enough.

The Heat got off to an early lead up 13-7 through three and a half minutes into the first. The Clippers slowly chipped away at the six-point deficit to lead 25-23 at the end of the first quarter. The Heat stayed in the second quarter. With the help of three three-point shots by Gabe Vincent, the Heat outscored the Clippers in the second quarter to lead by three at the half.

Now, we get into the dreaded third quarter. Miami made it a six-point game off a three by Duncan Robinson, but the was the high point. Los Angeles quickly took the lead and never let it go. Paul George scored 11 points in the quarter. Patrick Beverly and Landry Shamet scored six points each, helping the Clippers lead 92-80 by the end of the third quarter. Miami was outscored again in the fourth, losing 128-111.

It’s not a major issue for the regular season. They have a sizable lead over current playoff teams, it would take a complete collapse or a black hole sucking up AmericanAirlines Arena for them to miss the playoffs. The issue comes playoff time.

Depending on their seeding, home team advantage could make the difference as they try to make a deep playoff run. The first-seed Bucks have an out-of-this-world 20-4 record on the road, and Raptors haven’t been too shabby with an 18-7 record when playing in the States. If they even want to put up a fight, something needs to change while they have the time to do it.

The Heat continues its west coast trip Friday as they face the Sacramento Kings at 10 p.m.

Harrison is a sports coordinator at ESPN 98.1 FM/850 AM WRUF. He served as a beat writer for Florida Gators football for the 2019 and 2020 seasons. He also contributes to WRUF's Gainesville Sports Center segments and makes appearances on the Clash on Harp on Sports. Harrison has been a content writer for WRUF since January 2019 as well.
@HarrisonSmaj
Previous Gator Men’s Basketball Makes Program History with 81-75 Comeback Win Against Georgia
Next Florida Softball Set To Surprise