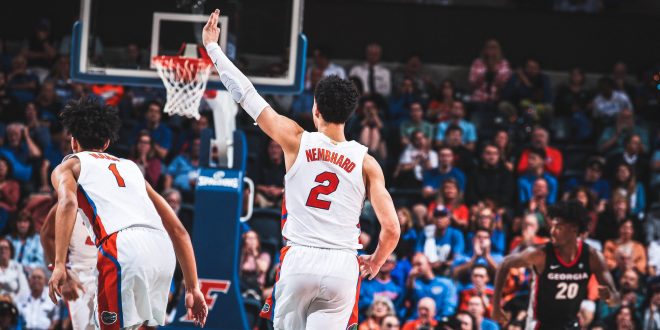 The steal. The dunk. The finish by the PG.#GatorsHoop pic.twitter.com/b3dInBKMFJ

The Gators started out well, getting off to an early 10-4 lead with 14 minutes left in the first half but early foul trouble, with Kerry Blackshear Jr and Keyontae Johnson getting their second fouls, came around to hurt the Gators.   When they went out, Georgia went on a roll.  The Bulldogs led 41-26 at half and extended their lead to 22 points before Florida mounted a huge comeback.  Earlier this season, Florida came from 21 down at home to beat Alabama in double overtime and this 22 point comeback is the largest by Florida since a 22 point comeback win on the road against South Carolina way back in 1993.

Gator guard Andrew Nembhard led the Gator comeback.  He had just six points at halftime but he turned it up in the second half to finish with 25 points, a game high for Florida.  He was not the only player to score in double-figure for the Gators. Three other players followed behind in Keyontae Johnson(15), Tre Mann (11), and Kerry Blackshear Jr. (12).

At the 17 minute mark of the second half, Georgia enjoyed its largest lead of the game at 52-30; that’s when Florida started its remarkable comeback.  Everything Florida shot seemed to go in and the Gators got better on the defensive end.   In the second half, Florida shot 60 percent from the field, including 7 of 11 from long distance to fuel the comeback.

The Bulldogs, lead by the nations top freshman scorer, Anthony Edwards at 19.3 points per game could not hold the lead but Edwards, a projected NBA first round pick, was everything he was advertised to be, as he led Georgia with 32 points while hitting 6 of 9 shots from beyond the arc.

This is one of two match ups between the Gators and Georgia this season. They will meet again in Athens on March 3.

The Gators will hit the road landing in Oxford, Mississippi to be hosted the Rebels. Florida defeated Ole Miss earlier in the season 71-55.

No. 25 Auburn is set to host the Georgia Bulldogs Wednesday night in an SEC …