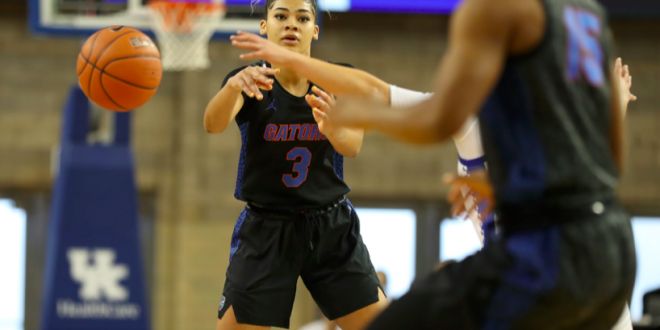 The Florida Gators Women’s Basketball team is coming off a 70-62 road victory against number 13 Kentucky. They are now set for another SEC matchup against the Georgia Bulldogs this weekend on their home turf.

After five straight losses, the Gators were able to turn it around in Lexington Kentucky last Sunday. The team played Kentucky at home earlier in the season and it resulted in a 45-65 loss. The Gators stepped up their game and were able to score 19 points in the first half and 51 in the second. One notable player from the matchup was freshman guard Lavender Briggs. She led her team with a remarkable 18 points, had 13 rebounds, and 6 assists. Two more players also scored double digits. Forward senior Zada Williams hit a double-double with 12 points and 12 rebounds, while freshman guard Nina Rickards finished the game with 12 points and 3 assists.

The first time both teams went head to head was back in January of 1978. Fast-forward into more recent years, the Florida Gators have fallen short up against the Bulldogs for two consecutive years. During the 2017-18 season, the Gators lost at home 57-66 and away in Georgia 43-63. The next year in the 2018-19 season, the same situation happened. In the away game, the final score was 58-93 and at home, it was 57-69, both in Georgia’s favor.

Preparing for the Game

Williams discusses that to be successful against a team of Georgia’s Caliber, they will have to build even more on their rebounding and offense.

She continues on by explaining that their team chemistry is an important aspect of being successful on the court.

@lavbriggs explains what the team is going to have to do on the court when taking on Georgia this weekend. @ESPNGainesville pic.twitter.com/Mhv74jqVmf

The Florida Gator vs Georgia Bulldog matchup takes place this Sunday at the Stephen C. O’Connell Center. Tipoff is at 1 p.m.

Sara Dastgerdi is a current student at the University of Florida.
Previous Football Season is Back Thanks to the XFL
Next Tampa Bay Vipers’ Squad Jam-Packed With Former Gators