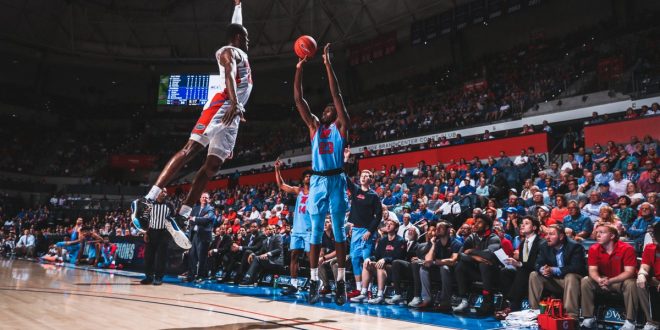 The Gators men’s basketball team is on the road to face the Ole Miss Rebels on Saturday.  These two teams met earlier in the season in Gainesville and Florida came away with a 71-55 victory.

The Gators are coming off a very impressive 22 point comeback win against Georgia where their sophomore guard, Andrew Nembhard, rattled in a 25-point career high game leading his team to another SEC victory. Coming back from such a large deficit tied for one of the largest comebacks in program history as the Gators won 81-75.  It always seems to be a good battle when these two teams play and Gator coach Mike White played his college ball in Oxford back in the day as well.

Ole Miss did not have two of its better players when they came to Gainesville but they will have them back for this contest.  Tyree Breein and starting forward Khadim Sy are both coming off nice games in an Ole Miss win over South Carolina.  Breein leads this Ole Miss team in scoring averaging 18.9 points per game and he had a career high 38 points in the win over the Gamecocks.

Florida guard Andrew Nembhard talks about having Breein back in the starting lineup for the Rebels.

“Yeah, big difference. I mean, he’s the leading scorer in the SEC, scores like 22 a game, so I mean, he’s gonna be a big factor. Obviously coming into the game, we beat them last time, but he didn’t play, and their big man didn’t play, so totally different game plan for them.”

This match up between Florida and Ole Miss is set for 2 p.m. on ESPNU.