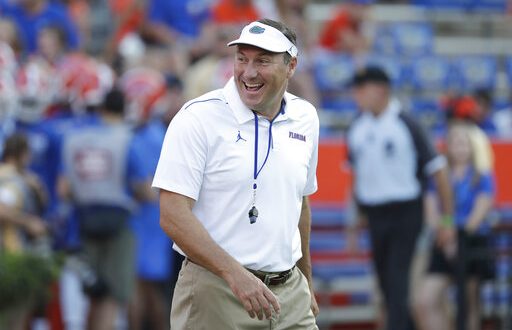 ” What an exciting weekend this will be for Gator Nation. I can’t wait for our staff and players to be back home in The Swamp.” – Head Coach Dan Mullen

Mullen managed to execute two consecutive winning seasons accompanied by back-to-back New Year’s Six Bowl victories. Florida has not finished with over 10 wins in two season since 2008 and 2009. The 2019 season watched the Gators secure 11 wins, the first time since 2010. With previous success, Mullen is excited to get the 2020 season underway.

Whose invited to Spring Practices?

The Gators are set to begin practices on March 16. A total of six practices have been arranged to be open, including three to the public.

All of the open practices are set to take place at Sanders Practice Fields. The south and east sides of the facility will be set up with bleachers for fans to view the practices. Along with public viewing, season ticket holders can visit practice on March 31, and Alachua County First Responders and Law Enforcement are invited on April 8. Lastly, the University of Florida faculty and staff are able to attend practice on April 14.

New Kids on the Block

Going into the spring game and 2020 season, Florida eagerly awaits to see how the new recruits and transfers will perform. The Gators acquired a new punter, Jeremy Crawshaw, hailing from the land down under. Switching from international to the local arena, one new player will not travel far to don the orange and blue. Quarterback Anthony Richardson lives in Gainesville even attending Eastside. They will participate in spring practices, and potentially get to play in the Swamp for the very first time come April.

Spring practices will be concluded by the annual Orange and Blue game, presented by Sunniland. The game is set on April 13, kickoff is still being determined. More details surrounding the game and activities of the week will be released later once times are finalized.