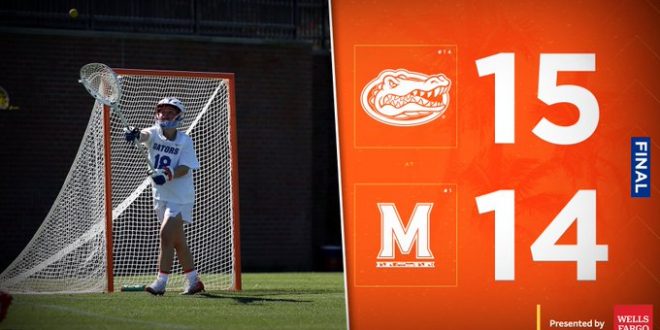 The Florida Gators Lacrosse team stunned the country as they knocked off the defending champions, No. 1 Maryland. Maryland only lost one game last during the 2019 season. It was the Gators’ sixth overall meeting with the Terps. The Gators broke Maryland’s 86-game home win streak, going all the way back to March 10, 2012. Maryland won four National Championships since then. The Gators jump up 10 spots in the latest national rankings, putting them at No. 4.

This Gators team has started off the season with two Top 20 teams with No. 18 Colorado and No. 1 Maryland. Both games ended with a one-goal difference, with the Gators beating Colorado 11-10 and Maryland 15-14.  It was a tight one, as the largest lead was only by two goals.

Junior midfielder Shannon Kavanagh scored a career-high eight goals, leading the Gators. Kavanagh notches the second-most goals scored in a game in program history, including the game-winning goal with 49 seconds left in the second half. Two others, redshirt junior Brianna Harris and redshirt freshman Emerson Cabrera, both scored hat-tricks. Lastly, Sophomore Hannah Mardiney scored her first goal of the season to complete the 15 goals.

The Gators came out and were able to cause six turnovers. Cabrera was able to cause two of them, and freshman defender Becky Browndorf did as well. This was a career-best for both players. Also, redshirt freshman goalkeeper Sarah Reznick had herself a night with 14 saves, which is her career-high.

What and When to Watch

The Gators have a rough schedule coming, as the play against three top 25 teams in their next five games. Next time, the Gators face off against Loyola Saturday afternoon, who is currently ranked No. 12 in the nation. They will play at home in the Donald R. Dizney Stadium to keep their undefeated record alive.