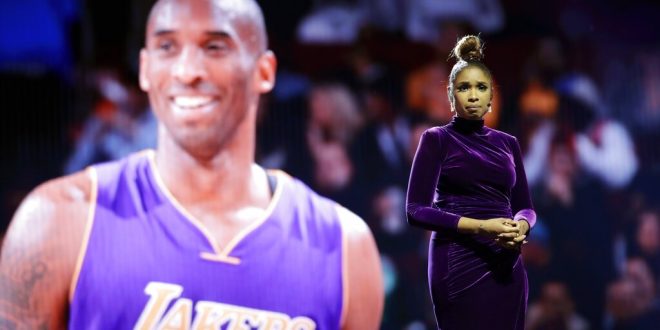 Jennifer Hudson sings a tribute to former NBA All-Star Kobe Bryant and his daughter Gianna, who were killed in a helicopter crash Jan. 26, before the NBA All-Star basketball game Sunday, Feb. 16, 2020, in Chicago. (AP Photo/Nam Huh)

The 2020 NBA All-Star Game is normally a time of celebration. However, this year’s game in Chicago had a cloud of somberness hanging over it as the league honored the late Kobe Bryant.

It’s been almost three weeks since the Laker legend was tragically killed in a helicopter crash with his daughter Gianna, 13, and seven others. The NBA chose to honor the basketball great in a few ways on Sunday night.

The first tribute of the night came when singer/actress Jennifer Hudson delivered a performance in honor of Bryant as images of Bryant and Gianna flashed behind her. As the NBA All-Stars looked on, it was clear that Hudson’s touching performance had struck a chord with them.

Los Angeles forward Anthony Davis agreed with Houston guard James Harden and also said that the weekend as a whole was a beautiful way to pay tribute to Bryant’s legacy.

The first notable change was on the jerseys of the players. Every player on Team Giannis donned No. 24, Bryant’s number, and every player on Team LeBron wore No. 2, Gianna’s number from her basketball team. Each jersey also featured a patch honoring the nine lives lost in the tragic helicopter crash.

Lakers’ superstar LeBron James, who was the captain of Team LeBron after receiving the most All-Star votes in the Western Conference, said the jerseys were just one way that Bryant’s presence was felt throughout the game.

This year, the NBA unveiled new changes to the game format. One of the changes was adding 24 points to the team with the highest score through three quarters. The result? One of the most competitive All-Star games in NBA history.

This 4th QT of @NBA All-Star Game is an absolutely phenomenal look for the game of basketball. For these guys to be going at it like this — in an exhibition game —….you can’t ask for more than this. This is what fans crave and these players delivered.#ProudOfThemAll

The final tribute to Bryant actually came two days before the game when Commissioner Adam Silver announced the All-Star game MVP trophy would be renamed in Bryant’s honor.

Clippers’ forward Kawhi Leonard became the first recipient of the Kobe Bryant MVP Award after he scored a game-high 30 points and notched seven rebounds, along with relentless defensive effort in the final quarter.

Leonard’s performance was key to Team LeBron’s 157-155 win, but the award means more to Leonard than just another piece of hardware to decorate his trophy case.

The NBA will resume action on Thursday.