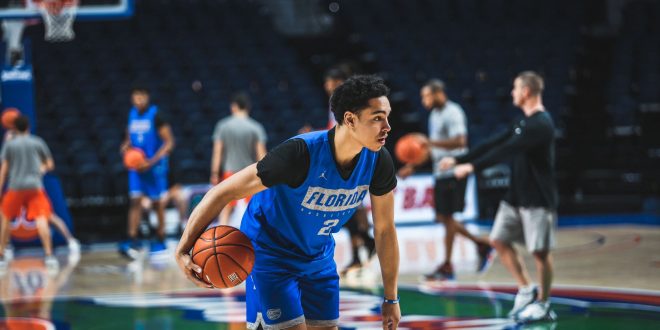 With only six games left before the conference tournament, the Florida Gators men’s basketball team will try to pick up some momentum against Arkansas Tuesday night.

The Gators are coming off of their best win of the season. Florida trounced the Vanderbilt Commodores 84-66 in a rout to celebrate Billy Donovan and the newly named court in the O’Connell Center. They’ve now won four of their last five to sit at 16-9 on the season (8-4 in the SEC).

The Razorbacks are in the middle of the worst stretch of their season, dropping their last four games. On Feb. 15, Arkansas lost a nail-biter to the Mississippi State Bulldogs, 78-77. They currently sit at 16-9 on the season (4-8 in the SEC).

Florida head coach Mike White is 7-1 against the Razorbacks, including a 66-50 win last season in the SEC Tournament. The Gators have won 13 straight home games against Arkansas, with the last loss coming in 1995.

Arkansas head coach Eric Musselman coached last season’s Nevada men’s basketball team, who the Gators upset in the NCAA Tournament as a 10 seed. According to White, he’s drawing from the film of that team to understand this season’s Razorbacks.

According to Gators sophomore Andrew Nembhard, Arkansas plays much like the Nevada team he faced in the tournament last season.

“A fast team. They play fast. A good defensive team. I remember playing Nevada last year, kinda the same as them. A lot of ISOs, so that’s what we’re kind of looking at on the scouting report right now.” – Andrew Nembhard

As the Gators approach the home-stretch of the regular season, every game matters just a little bit more. Florida now has its last chance to make a case for the NCAA Tournament. After Arkansas, four of the next five opponents for the Gators are in Quadrant 1. Ending the season on a winning streak could push the Gators off of the bubble into placement in March Madness.

Florida’s first obstacle in a key stretch is a very similar Arkansas team. The Razorbacks’ scoring and rebounding leader is Mason Jones. Jones, a 6’5″ junior from Texas, averages 20.8 points per game and 6.0 rebounds per game.

According to White, Jones has many different strengths that make him a good player.

Arkansas ranks first in the country in defending the three-point shot, allowing only a 25.3% clip on the season. This is a direct foil to a Gators squad that loves to shoot the three. Florida ranks first in conference play in three-point percentage with 38.2%

White thinks that Arkansas has one of the best frontcourts in the entire country.

“I think their frontcourt guys are as quick and fast as any frontcourt in our league. Good speed and quickness and length in the backcourt. They extend, they pressure you. Often times you’ll see teams that turn you over as often as they do also defend the three because they’re out there.” – Mike White

Radio coverage of the game starts at 6:25 pm on 103.7 The Gator and live on Twitter from @ESPNGainesville starting at 6:30 p.m.

Steven Walker is a beat writer for ESPN Gainesville and is currently studying Journalism & Sports Media at the University of Florida.
@swalker_7
Previous Manfred stays behind Astros punishment, not punishing players
Next UF Women’s Swimming Prepares for SEC Championship at Auburn