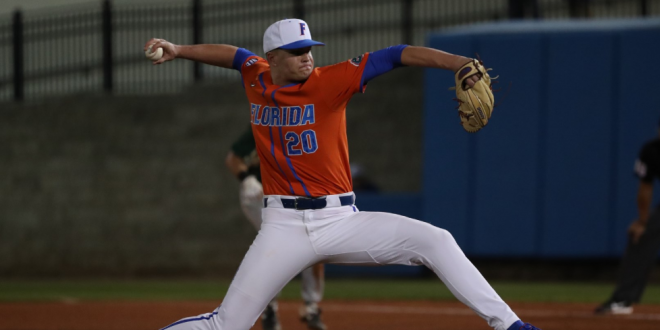 The Florida Gators baseball team heads down to Coral Gables for a weekend series against top-ranked Miami. It’s a top 5 matchup in a hostile environment and a critical early test for Kevin O’Sullivan’s squad.

“I remember getting on the bus, getting ready to leave Gainesville, and you could hear a pin drop,” Miami pitcher Chris McMahon said. “Everyone was pretty disappointed. We left that place feeling like we should have beaten them. We have another great opportunity again this weekend to take care of business.”

Who Are the Canes?

Miami student broadcaster Josh White pointed to the starting pitching as a strength of this team. According to him, Miami was one of three teams in the preseason Top 25 to return three starters with at least 12 starts a season ago.

Additionally, Miami has four guys hitting .400 or better through its first four games. The Canes’ leader in average from last season, Adrian Del Castillo, is smoking the ball at a .583 clip.

He’s actually on some watchlists for the Golden Spikes Award. He already has seven hits, two home runs, eight RBIs and five runs scored this season.

“It’s just everything somebody could dream of,” Miami sophomore JP Gates said. “You have two Florida contenders, two of the best schools in Florida baseball, and we are both ranked very high. It’s going to be a battle back and forth.”

This could be a great pitching series overall. Each team possesses a deep, quality pitching staff. Miami’s pen only allowed four earned runs and nine hits in a combined 14 innings of work. White called it much improved from a season ago.

White on use of freshmen arms:

Those freshmen are Alex McFarlane and Jake Garland. White said McFarlane sits at 93 to 94 mph with a wipeout slider while Garland is more command-oriented.

Also, the Canes have a closer in Daniel Federman who can be stretched if needed. He has multiple saves of four outs or more.

But, Florida isn’t short on freshmen arms or even arms in general. Twelve different pitchers saw time out of the pen for Florida in five games including a few starts. They have a sub-three combined ERA and 39 strikeouts.

Kevin O’Sullivan is just 11-7 when his team travels to Coral Gables.

It could be College World Series-esque in terms of buzz. But close to none of that energy will be in support of Florida. All three games are sold out at Alex Rodriguez Park at Mark Light Field. Any other tickets sold are from secondary markets.

However, Florida can show just how improved it is from last season with a great performance in a formidable situation this weekend.