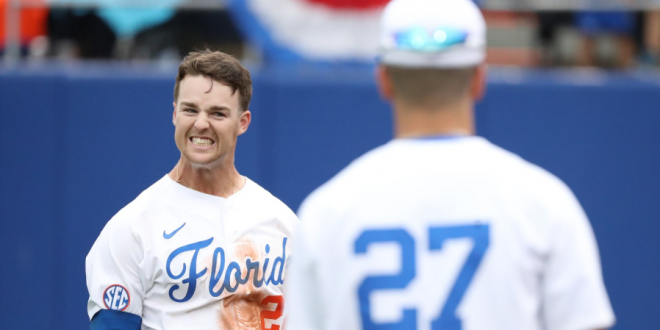 Tuesday night’s game against Jacksonville wasn’t even close. A four-hour 13-3 blowout. Wednesday night’s contest was on the other end of the spectrum.

Florida defeated the Jacksonville University Dolphins on 4-3 on a walk off single by freshman Isaac Nunez Wednesday night. The second-ranked Gators move to 5-0 before a highly anticipated weekend series with top-ranked Miami.

“It was a good night for us,” Gator coach Kevin O’Sullivan said. “It was a good test for us. And we needed a game like this before heading down to Miami.”

The Gators found themselves trailing 3-0 after the first inning and Jud Fabian proved to be a key factor in Florida clawing back.

Enter Isaac Nunez. The Orlando native had only a strikeout in two appearances to his name in his fledgling career at that point. And his first career base knock is a line drive into right center field for a walk-off.

As a baseball fan this is awesome/insightful. Isaac Nunez talks about his walk off/first career hit:

"Think about it, the first two (pitches) you go right by me. Cmon, freshman, everything's going crazy for him let's go again. I was sitting fastball"#Gators pic.twitter.com/XRWie0tbEd

O’Sullivan on how most walk-offs happen:

He said they spoke about staying focused in a midweek game like this before a big series and was proud of his team’s resiliency.

The first inning snowballed for Jordan Butler. The lefty retired his first batter, batter number two reached on an error and Butler fought to get out JU’s three-hole hitter but a two-out walk and a home run later, Florida found itself trailing 3-0.

Butler got the next guy swinging, threw a scoreless second and pitched a third of an inning before exiting.  Florida’s bullpen picked up the slack from there.  O’Sullivan said his bullpen was “outstanding” after the initial frame. The Dolphins hit .161 as a team against Florida pitching following the first inning.

The bullpen combined for no runs allowed on four hits with four walks and eight punch outs over the next 7.2 innings. Equally important, Ben Specht and Nick Pogue combined for one hit allowed with four Ks in the final 3.2 innings.

O’Sullivan might have used six different pitchers but each one performed in clutch situations. A home run was JU’s only hit with runners on (1-for-17) and runners in scoring position (1-for-15).

O’Sullivan on his pitching staff.

Next up is the Gators’ biggest test of this young season, a weekend series with the number one Miami Hurricanes in Coral Gables.  With all of those games likely to be close, it’s a good thing Florida got some experience before heading into the belly of the beast.