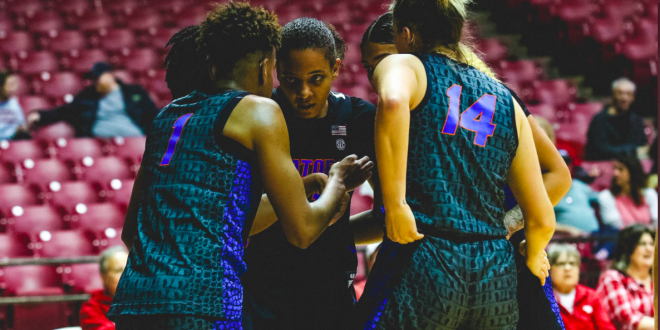 The Gator women’s basketball team dropped an SEC road game against Alabama 69-62 on Thursday night.  The Gators are now 14-12 and 5-8 in conference play.

This game was kept close for the majority of time, featuring 14 changes in the lead and 10 ties. It was close late, as the game was tied at 58 with 3:54 remaining in the game. After that, Alabama went on a 8-0 run while the Gators suffered a three-minute scoring drought.

Joining her in the double digits was red shirt junior guard Kiki Smith who reached 11 points. She also had five assists and two rebounds.

Right behind her was sophomore guard Ariel Johnson who got eight points, three rebounds and two steals.

Despite being able to keep the game close, the Gators were struggling in both sides of the ball.

Offensively, Florida had the opportunity to extend their leads multiple times at the free-throw line. The Gators were able to shoot for an extra point 21 times, but only made eight from the stripe.

Briggs, who helped her team win against Ole Miss with her free-throws, shot seven times from the line and was only able to get two. Smith also struggled at the free-throw line as she shot six times and only made two.

Defensively, the Gators were on thin ice fouling-wise as two players had three fouls, two had four, and one had to sit the rest of the game after she reached five.

Florida head coach Cam Newbauer says that these little mistakes need to be fixed if they want to win SEC road games.

“There were too many empty possessions, missed layups and free throws. We had to come out as the aggressor and we didn’t do it, but Alabama did exactly that so we have to give them credit because they played well and they played aggressively for the entire game.”

The Gators will return home on Sunday to host the No.22 Arkansas Razorbacks. Tip off for this SEC match up is set for 4 pm.

Camila is a senior at the University of Florida, who served as a beat writer for the women's basketball team from 2019 until the 2021 season. She was also a beat writer for the Gators football team during the 2020 season. Camila is also WUFT's news director as well as a sports reporter/anchor.
@CamilaMaffuz
Previous Gator Softball On West Coast For Big Tournament
Next Despite Late Rally, Buchholz Baseball Falls In Home Opener