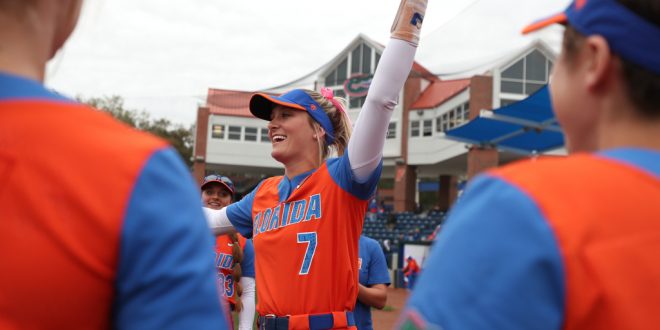 A trip to the wild west awaits the Florida softball team as it plays in the Mary Nutter Collegiate Classic. Fittingly, the Gators tangle with two teams of Wildcats to begin the invitational.

No. 7 Florida (12-1) endures its toughest test yet this season in its first game on Friday. That test is number five Arizona (8-2).  Arizona fell to Texas A&M in its first game of the Mary Nutter Classic, 7-6. Its only prior loss came in extra innings against then number two Oklahoma.

The Gators have Arizona’s number of late. Florida has won each of the last five meetings between the two schools.

In Florida’s second game, the Gators face another ranked team in number 25 Northwestern (4-5). Much to the delight of Gators fans, Northwestern pulled a 6-2 upset of then number five FSU last weekend.

Sophomore pitcher Danielle Williams struck out 11 Seminoles in that win. Rachel Lewis is also a key player for Northwestern, especially on offense. Lewis leads the Big Ten with five doubles.

A Mary Nutter Homecoming for Lugo

Arizona carries14 players on its roster from California, so it’s no surprise that Lugo played with some of them.  She enters the weekend fresh off of her first career complete-game no hitter. She baffled the Jacksonville lineup on Wednesday night, striking out nine.

In the mid-week victory over Jacksonville, Kendyl Lindaman and Charla Echols stroked back-to-back home runs. Both sluggers are red hot.

Lindaman extended her hitting streak to 12 with the round-tripper, but now faces tougher pitching. She didn’t sound fazed by the higher competition.

Echols is raking, with an eye-popping .513 average with 19 RBI and five homers. Gator head coach Tim Walton traces her statistics back to her killer instinct at the plate.

First pitch for the Gators against Arizona is at 3:30 PM (ET). Then, Florida and Northwestern play at 6 PM (ET).