Tonight is a big night for two local basketball teams. The Hawthorne Hornets girl’s basketball team goes for the state title in Lakeland, and the Eastside Rams boy’s team will try to clinch a spot in Lakeland.

Eastside Boys on the Road to Lakeland

The Eastside Rams boys basketball team has had a challenging road in the playoffs. The Rams were seeded 3rd in region 2 of the Class 4A state tournament. After a home win against Eustis, the Rams had to go on the road to The Villages Charter on Tuesday. Both of the Rams victories in the playoffs were by double digits. Eastside defeated Eustis 62-51, and The Villages Charter 77-66. Eastside will once again be on the road tonight as they face Lake Highland Prep from Orlando.

The Highlanders are 23-6 on the season. The only common opponent shared between the two schools is Eustis. Lake Highland Prep defeated Eustis 74-48 earlier in the regular season, and as mentioned earlier, the Rams defeated Eustis in the playoffs last Thursday.

The Hawthorne Hornets girls basketball team enjoyed their home-court advantage in the playoffs. Their first two games in the Class 1A state tournament were played in Hawthorne. The Hornets defeated Fort Meade 56-21, and Wildwood 47-41. After those two wins, the Hornets punched their ticket to Lakeland for the second straight year. However, this time, the Hornets are looking for more than just an appearance.

Looking ahead to tonight, the Port St. Joe Sharks come in with a 26-5 record. The Sharks path to the state final began with defeating Sneads 58-25 at home. Then, the Sharks beat Blountstown 65-41 at home. Finally, Port St. Joe knocked off Madison County in Lakeland to secure their spot in the state final against Hawthorne. Here are Coach Ingram’s thoughts on the game. 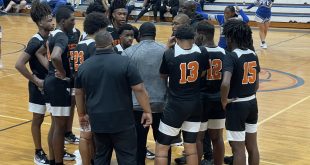 Hawthorne vs. Bradford Set to Tip-Off in Lakeland