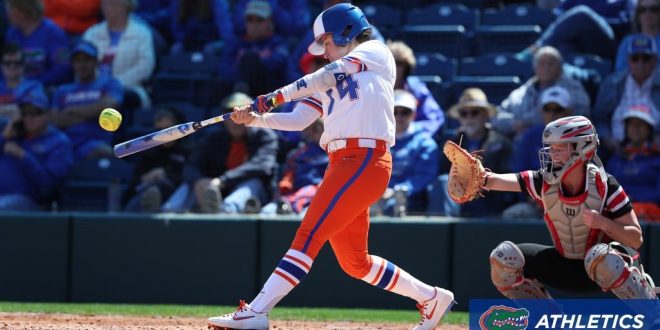 Gator Softball Drops Two of Three Against No. 10 Louisiana

In each of its three games this weekend against Louisiana-Lafayette, the Florida softball team held a commanding 4-0 lead. Although this statistic suggests a series sweep by the Gators, no such sweep occurred. The resilient Ragin’ Cajuns managed to win two of those three games.

A perfect balance of offense, defense and pitching led to a 6-0 shutout of Louisiana on Friday. Kendyl Lindaman and Charla Echols combined for five hits, carrying the offense.

The most emphatic of those hits gave the Gators a 3-0 edge in the bottom of the fifth. Lindaman sent a ball into orbit before it fell back to Earth and beyond the Florida bullpen in left-center for a home run.

A handful of double-plays aided Natalie Lugo and Katie Chronister, who pitched seven scoreless innings. Cheyenne Lindsey added a defensive assist, gunning out a runner at home to end the sixth.

Continuing their momentum from the first game, the Gators jumped out to a 4-0 lead in the bottom of the first in Game Two. Before the crowd could blink, Louisiana held a 5-4 lead in the top of the second.

At first, Florida’s Rylee Trlicek pitched effectively. However, she failed to make it out of that second inning.  On the flip side, Summer Ellyson rebounded after her rough start for Louisiana. She shut the Gators down through six innings. The Ragin’ Cajuns hung on to win, 6-5, which tied the weekend set.

In the rubber match on Sunday, it was déjà vu all over again. Florida found itself out in front 4-0 after two innings. Lindaman continued to deliver at the dish with a three-run blast to center.

Through five, the Gators looked to be well on their way to clinching the series. Lugo yielded only one run over those first five innings.

Despite ending the game with 11 strikeouts, Lugo struggled in her last 1.2 innings of work. A pair of two-run homers flipped the script for Louisiana late in the game. Similar to the previous game, the Ragin’ Cajuns found a way to come back.

Down 7-4 in the final inning, Echols drilled a two-run bomb to right for Florida; however, the Gators fell just shy of extending or winning the game.

Louisiana improved to 14-5 after winning the series. Florida (17-4) hosts Florida Gulf Coast on Wednesday. This is the final game for the Gators before starting SEC play against Auburn on Friday.

@NevadaCullen
Previous ‘They deserve the asterisk’: Astros booed in home loss amid continuing cheating scandal fallout
Next Teammates Today, Rivals Tomorrow: Buchholz Duo to be on Opposite Sides of Heated SEC Rivalry